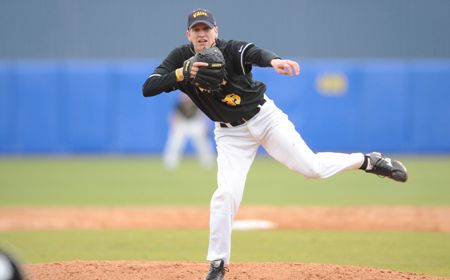 Saturday marked the fourth straight day Valparaiso got a strong pitching performance in the 2010 Horizon League Baseball Championship presented by U.S. Army, but for the second time in the tournament the Crusaders suffered a 3-1 loss to Milwaukee at U. S. Steel Yard in Gary, eliminating the Brown and Gold from the championship.

Tyler Deetjen (Saint Charles, Ill./East H.S.) went 6.2 innings scattering just four hits and allowing three runs, only two of which were earned, but suffered the loss (3-4) as the Panthers’ Kyle Schmidt was just as strong, working 6.2 innings and allowing one run and six hits while striking out three.  He did not get a decision though.

Milwaukee scored in the opening inning without the benefit of a hit.  Cole Kraft led off the bottom of the first being hit by a pitch and advanced to second on a passed ball.  A sacrifice bunt by Shaun Wegner moved him along to third, and he scored on a groundout by Dan Buchholz.

The game settled into a pitcher’s dual as Deetjen battled Schmidt pitch for pitch.  Deetjen needed just 47 pitches to get through the sixth inning, but the Crusaders still trailed 1-0.

Valpo tied the game in the top of the seventh.  Karch Kowalczyk (Peru, Ill./La Salle-Peru H.S.) laced a two-out double to the gap in left-center.  Steven Scoby (Delton, Mich./Delton H.S.) followed ripping a double to the gap in right-center, plating Kowalczyk and tying the game at one.  Kyle Muhlsteff (Yorba Linda, Calif./Esperanza H.S.) appeared to give the Crusaders the lead with a double inside the bag at third, but it was called foul.  Milwaukee brought in Greg Blahowiak with a 1-2 count on Muhlsteff and got him to fly to right, ending the inning knotted at one.

“That play definitely changed the game, but there is nothing you can do about it,” head coach Tracy Woodson said.  “Deetjen pitched just great and we had some more chances late, but couldn’t push across any more runs.”

With two outs and runners on the corners in the bottom of the seventh, the Panthers retook the lead.  Nino Guerrero hit a ball deep in the hole at short that Muhlsteff fielded and made a bang bang throw to first, but Guerrero was called safe allowing Buchholz score.  Following a walk to Doug Dekoning, to load the bases, Jonathan Capasso also drew a free pass, forcing home Sam Sivilotti and making it 3-1 Milwaukee.

The Crusaders threatened in the eighth, as Kyle Gaedele (Arlington Heights, Ill./Rolling Meadows H.S.) singled, advanced to second  on a groundout, and stole third when Robbie Robinson (Brea, Calif./Olinda H.S.) walked.  Bo McClendon (Chesterton, Ind./Merrillville H.S.), pinch running for Robinson, stole second to put two runners in scoring position with two outs.  Panther closer Cameron Amsrud struck out Hagel to end the threat.  Valpo put two runners on in the ninth as well, but a game-ending double play allowed Amsrud to earn his eighth save of the year.

Greg Blahowiak earned the win (2-0) for Milwaukee (31-24), which moves on to face Wright State for the Horizon League title.

Gaedele, Will Hagel (Arlington Heights, Ill./Prospect H.S.), and Scoby each had two hits for the Brown and Gold, which finished the game with eight.  Buchholz was the only Panther with two hits.

Valparaiso (24-32) sees its season end with the third place finish in the tournament.

“We saw a lot of positives in this tournament to build upon for next year,” Woodson concluded.