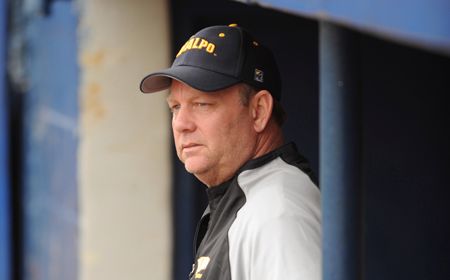 Coach Woodson has added the addition of nine players for the 2012 season. (Dave Schofield)

Valparaiso head baseball coach Tracy Woodson has officially announced the members of the 2011 recruiting class that will be joining the team for the 2012 baseball season.  The class features nine student-athletes, including seven incoming freshman and two junior college transfers.

The Crusaders will welcome Andy Burns, Mark Johnson, Ryan Kennedy, Ben Mahar, Spencer Mahoney, Devin Pickell, Rob Rabakozi, Kyle Wormington, and Grant Yoder to the roster for the spring of 2012.  This recruiting class is highlighted by three players who are currently ranked in the top 50 in the state of Illinois according to Prep Baseball Report.

“I first need to thank my coaching staff”, Woodson said.  “They did a tremendous job in identifying and evaluating players as well as all the other work necessary to put this recruiting class together.  We have addressed every need for our baseball program. These young men are not only athletically talented but they are also intelligent and possess a great work ethic.  When we recruit we always talk about finding the right fit and we believe that Valparaiso University and our team is a great fit for each of them.  This was a very important recruiting class for our baseball program as we have to replace a large graduating class.  We are excited and pleased about who we have coming in.”

Burns, from Edwardsville, Ill. is a 5- 10, 180-pound middle infielder from Heartland Community College.  The junior college transfer hit .336 and had 16 stolen bases as a freshman in 2010 after playing for Edwardsville High School. The former teammate of current Valpo shortstop Bobby Martin, Burns will have two years of eligibility at Valparaiso University.

“We are thrilled to have Andy join our program,” Woodson said.  “He comes to us from Heartland where coach Metzger has built one of the best junior college programs in the Midwest.  Andy will be relied on to strengthen our defense up the middle with Bobby next year.  He also swings it from the left side and will give us added speed on the base paths.”

Johnson, from Evanston, Ill., is a 5-8, 170-pound outfielder from Evanston Township High School.  Despite being hampered by a hamstring injury, Johnson finished the 2010 season with a .303 batting average and two homeruns, nine RBIs, and 13 stolen bases in only 19 games played. He was the 2010 Program Impact Award Winner for his high school team and named First Team USSSA All-American which competed in Japan in August of 2010.

“Mark gives us another left-handed bat with tremendous speed and athleticism,” Woodson stated.  “Unfortunately he was slowed with an injury last spring but he is healthy now and can flat out run (a 6.7 60-yard dash).  He has some pop in his bat and that combined with his maturity and work ethic will give him an opportunity to play for us immediately.  Mark has worked hard for all of his personal success on the field and in the classroom and we expect that record of success to continue here at Valpo.”

Kennedy, from Gurnee, Ill., is a 6-0, 160-pound right handed pitcher from Warren High School. Kennedy finished his junior campaign with a 7-4 record and a 2.98 ERA.  An Honorable Mention All-Conference selection, Kennedy is a member of the Athletic Leadership Council and also contributed to Warren's first ever state sectional appearance.

“Ryan is a righty who has three pitches and a projectable body,” added Woodson.  “He is an intelligent pitcher that understands what it takes to be successful on the mound. Ryan is an outstanding competitor who will only continue to get better and better during his time at Valparaiso.”

Mahar, from Mundelein, Ill., is a 6- 4, 210-pound right-handed pitcher from Mundelein High School and is rated as the 50th best player in Illinois by Prep Baseball Report.  Mahar finished his junior season with a 6-6 record with an ERA of 2.55.  Along with his high school success, Mahar has pitched for the Racine Hitters travel program and holds an overall record of 16-4 with a 2.44 ERA.  He was invited to the Area Code tryouts as well as the Silver and Black games this past summer.  Mahar was also a starter for Team Illinois in August 2010 and pitched against Team Minnesota, allowing one run in three innings of work.

“Ben is a big, strong power arm,” said Woodson. “He has had success with his high school and his travel team.  His physical maturity combined with his experience competing at a high level will give him a chance to compete for a starting job as a freshman.  We have been lucky enough to have strong pitching for the last couple of years and with Ben joining the team, we look forward to that pitching success to continue the  next few years as well.”

Mahoney, from LaGrange Park, Ill., is a 6- 4, 180-pound left-handed hitting shortstop from Lyons Township High School. Mahoney is ranked one of the top 10 shortstops in the 2011 recruiting class and #48 overall in Illinois by Prep Baseball Report.  The Lyons Township lead-off hitter finished his junior season with a .339 batting average, a .444 on base percentage, eight doubles, three triples, and 16 RBIs.  He led his team in runs scored (31), walks (20), and stolen bases (eight). Mahoney was named All-West Suburban Conference team, Suburban Life Newspapers All-Area Honorable Mention team, a Stevenson Showcase selection, and a Chicago Sun Times Top-100 player.

“When we were recruiting shortstops we were very specific in what we were looking for and Spencer fit every one of the criteria,” said Woodson.  “He swings it from the left side for power and average.  He is an athlete that has great actions, and he is versatile enough to play all the infield positions which will only make us better.  Spencer is the kind of guy that every coach wants playing for him as he possesses the intangible qualities that make him a leader on the field.”

Pickell, from Chicago, Ill. is a 6-0, 180-pound left-handed pitcher from St. Patrick High School.  A three year varsity starter, he finished his junior season with a 5-2 record with one save in 32 innings pitched.  He had 27 strikeouts while recording 3.57 ERA. Pickell also posted a 1.13 ERA in 25 innings with 20 strikeouts his sophomore year at St. Patrick.  Individually ranked three consecutive years by Prep Baseball Report, Pickell was a starter for the 2009 USSSA State Championship team as well as a member of the USSSA Mid-West Regional team.

“We believe that Devin can be one of the biggest surprises of this recruiting class,” added Woodson.  “He is a lefty with a great mound presence.  We have already seen a rise in his velocity this fall and we believe that this will continue at Valpo.  Coach Schmack is really looking forward to working with Devin.”

Rabakozi, Burbank, Ill., is a 6-3, 180-pound catcher from Reavis High, and is ranked as the fifth best catcher and 44th overall in the class of 2011 in Illinois by Prep Baseball Report.  Rabakozi has been a standout varsity performer the last two years as he finished his sophomore year with a .476 batting average with nine doubles, five homeruns and 29 RBIs. The strong-armed catcher also finished his junior season with a .300 batting average along with four homeruns. He was named the Offensive Player of the Year and the Contributions Award by his high school team.

“When we started recruiting for this class a year ago, our number one priority was finding the best catcher that fit with our program,” commented Woodson.  “Rob was our first commit and we honestly believe we got one of the best catchers in the Midwest.  He has a strong arm, a projectable pro-type body, and he is also very athletic.  We believe that once his hitting catches up with his work behind the plate, he will be a force in the lineup.”

Wormington, from Norman, Okla., is a 6-3, 200-pound right-handed pitcher transferring from Connors State College after playing at Norman North High School.  In his freshman year, Wormington had a record of 5-1 and a 4.50 earned run average with 25 strikeouts in 44 innings of work.  He is projected to be one of the top two starters for his junior college baseball program for 2011 season.  He will have two years of eligibility left when he arrives at Valparaiso University.

“With the graduation of this year’s senior class, we knew we needed to find a junior college pitcher that would be able to come in and pitch right away,” said Woodson.  “Kyle not only gives us a strong arm but also the experience needed to headline our pitching staff.  He is a proven winner and we believe that Kyle is going to play a big part in the future success of this program.”

Grant Yoder, from Fort Wayne, Ind., is a 6-4, 220-pound left-handed hitting first baseman from Snider High School. Yoder was a sophomore on Snider’s 2009 4A State Championship squad while finishing the season with a .488 batting average and 21 RBIs. He missed his junior season due to a broken leg prior to the season.  He has played summer and fall baseball for the Fort Wayne Cubs the past two seasons.

“Grant was one of those players that was a little under the radar due to an injury his junior season,” concluded Woodson. "We believe we got an absolute steal.  Grant has a pro-type body that will give us power from the left side.  He has a polished approach at the plate which allows him to hit for both average and power and will be a middle-of-the-order type run producer. We look forward to working with Grant.”