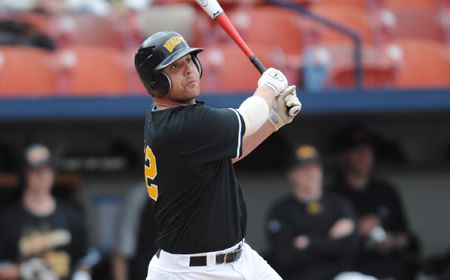 Robbie Robinson is set for his senior season after earning All-Newcomer Team honors in 2010. (Dave Schofield)

The Valparaiso University baseball team takes to the diamond with high hopes for the 2011 campaign.  The Crusaders are coming off of a third place finish in last year’s Horizon League Tournament, and return 22 players from last year’s squad.

Fifth-year head coach Tracy Woodson returns at the helm of the Brown and Gold, and has brought in 12 new faces to the program, looking to improve upon last year’s 24-32 overall record and 9-10 mark in Horizon League play.  The Crusaders finished fourth in the conference during the regular season, moving up a spot in the postseason tournament.

Valpo has been picked to finish fourth in the conference again this year according the coaches’ preseason poll.  The Crusaders will face another challenging non-conference schedule with two trips out west, including a three-game series in Hawai’i over Easter weekend.  Valpo will look for the non-conference action to set the stage for the 26-game conference slate, looking to climb to the top of the Horizon League ladder.

One of the keys for the Crusaders heading into the 2011 season is the pitching staff.  Valpo looks to replace last year’s ace, and 2010 Horizon League Pitcher of the Year Bryce Shafer, who was drafted by the Chicago Cubs last summer and has signed a professional contract.

Jon Gulbransen will take over the number one starter role as he heads into his senior season.  The southpaw had his best year as a Crusader in 2010, throwing 94.1 innings and posting a 4.67 earned run average, fourth best in the Horizon League.  A three-year member of the starting rotation, he has 38 career starts, including four complete games, taking the ball whenever it is handed to him.

Senior Damon McCormick will be used entirely on the mound this season after splitting time between weekend starts and playing in the infield.  In his first full season on the hill for the Crusaders, McCormick went 7-1 in nine starts, tying for second in the conference in victories.  His control was impeccable, as he walked just seven hitters in 67.1 innings.  The only right-hander set to start the season as a weekend starter, he had three complete games during his junior campaign.

Left-hander Tyler Deetjen rounds out Valpo’s weekend rotation to open the year.  A midweek starter and long reliever during the first two years of his Valpo career, Deetjen struck out 42 hitters in 52.1 innings last season.  The junior has posted a 5-5 record entering 2011, and will look to solidify the weekend staff.

Coach Woodson plans on using senior Justin Frane as well as freshman Cyrus Wimberly as midweek hurlers.  Frane has appeared in 26 games out of the bullpen the last two seasons while also starting in the Crusader outfield last year.  Wimberly arrives from Rockford Guilford High School where he was a three-time All-Northern Illinois Conference-10 selection.  He will get a taste of collegiate pitching from the beginning, looking to make an immediate impact with the Valpo staff.

Karch Kowalczyk will serve as the Crusader closer in 2011.  The team’s starting third baseman a year ago, he will look to fill the role held by Jarad Miller the last two seasons.  Miller, who is the school’s career saves record-holder with 28, will miss the season due to elbow surgery.  Kowalczyk’s first appearance of the season will be his collegiate debut on the mound.

Steve Godawa will again serve in a set-up role for the Crusaders.   With 67 career appearances, Godawa is no stranger to coming out of the bullpen.  He has pitched 76 innings heading into his senior season with six relief victories and a pair of saves.  Godawa has struck out 55 batters while walking just 25 over his first three years.  Junior college transfer Kevin Wild will also be used in a late inning setup role.  Pitching at Madison Junior College the last two years, Wild helped the team to 71 victories during his career there as well as a NJCAA Division II World Series appearance last season.

Right-handers Greg Stiller and Kevin Upp, along with lefties Kris Singh, Mike Jacobs, and Will Hagel will all vie for innings out of the bullpen as well for the Crusaders this season.

Beginning behind the plate, the Crusader offense and defense will be its strength this season.  Robbie Robinson and Corey Thibault will handle the catching duties for the Brown and Gold in 2011.  Robinson was named to the Horizon League All-Newcomer Team during his first season at Valpo after batting .327 with 43 runs batted in last year.  A senior, he hit .444 against Horizon League pitching one year ago, while posting a .512 on base percentage in conference play.

Thibault, another senior who came to Valpo prior to last season from junior college, saw action in 19 games, making 15 starts for the Crusaders in 2010.  He did not commit an error defensively in limited action last year.

The Crusader infield should be solid heading into the new season.  Ryan O’Gara recovered from a wrist injury that kept him out part of 2010, and finished the season solid.  He will again solidify the first base role for the Brown and Gold.  O’Gara batted .388 with six home runs in his junior year, slugging .603 for Valpo.  Solid with the glove, he has committed just five errors during his 96-game career.

In addition to closing for the Crusaders, Kowalczyk will also play second base.  The team’s third baseman as a freshman, he started 42 games as a rookie and now has a year’s experience playing collegiate baseball under his belt.

Junior college transfer Bobby Martin enters the season holding down the shortstop position after arriving from Heartland Community College.  He hit .395 with four homers last season before having his season cut short due to injury.  He has battled back though, and is set to open 2011 on the diamond.

Michael Morman will open the year at third base, a position that Wimberly will also occupy when he is not pitching.  Morman is a true freshman who set Boylan Catholic High School’s single season hits and runs record and also holds the career runs mark.

Sophomore Andrew Bain will also see some time in the infield this year, and may be used as a late innings defensive replacement.  He appeared in 26 games as a freshman, driving home 13 runs while playing both second and third base.

Hagel, a first baseman turned designated hitter will also provide offensive for the Crusaders.  He batted .308 last year with 19 RBIs after battling back from an injury that kept him sidelined in 2009.  He adds an extra left-handed bat to the Crusaders’ every day lineup.

Valpo’s outfield is solid and may be one of the strongest in the Horizon League.  Preseason All-American Kyle Gaedele leads the way and will start in right for the Crusaders.  A .373 hitter one year ago, he has been named the Horizon League’s preseason Player of the Year by several national baseball publications.  Last year he homered seven times and drove home 63 runs while posting a .610 slugging percentage.  A perfect 17-for-17 on the base paths swiping bases, Gaedele’s speed helped him leg out 19 doubles and eight triples as a sophomore.

Steven Scoby, another junior, will be a three-year starter in leftfield heading into the season.  A career .313 hitter with 46 runs batted in, Scoby is a solid hitter near the top of the batting order.  He has crossed the plate 59 times in 85 games while wearing the Brown and Gold, while providing a solid glove defensively.

Freshman Chris Manning is expected to open the season patrolling centerfield.  As a rookie he will get a taste of collegiate baseball from day one after being named the Sea View League’s Most Valuable Player while playing for El Toro High School in California last year.

Frane and David Klein give the Crusaders some senior leadership in the outfield.  Frane hit .361 with 35 RBIs last season while Klein batted .288, driving in 23 runs.  They give the Crusaders a pair of right-handed bats off of the bench.

As is customary, Woodson has put together a challenging non-conference schedule with the hopes of preparing the Crusaders for the rigors of Horizon League play.  Valpo will play its first 22 games away from Emory G. Bauer Field, opening on February 18 for the first of a three-game set at Austin Peay.  The annual spring break trip takes the Brown and Gold out west to face Cal State Northridge, Cal State Bakersfield, Cal Poly, and UNLV over a two week span.  Valpo will venture even further west over Easter weekend for a three-game series at Hawai’i.  A pair of Big Ten teams are on the non-conference slate as well, including a trip to Northwestern on March 30 and a home contest against Purdue at Emory G. Bauer Field on April 26.

The home opener at Emory G. Bauer Field is set for April 1, which also doubles as the Horizon League opener for the Crusaders when UIC invades Valparaiso.  The Crusaders close the home slate with a twinbill against Milwaukee on May 14, which will be Senior Day, before heading to Wisconsin for a three-game series with the Panthers one week later to wrap up the regular season.  This year the top six teams in the Horizon League will travel to Dayton, Ohio, and the campus of Wright State, for the league tournament May 25-29.

With a great deal of experience on the roster, hopes are high for this year’s Crusader ball club.  The Brown and Gold look to put runs on the scoreboard with its high octane offense while looking towards the pitching staff to keep the opponents off base.  As the year is set to open, Valparaiso looks for its best Horizon League finish ever while trying to earn a spot in the NCAA Tournament for the first time since 1976.