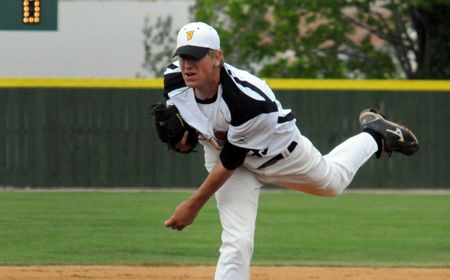 For the third time this weekend Valparaiso jumped on top first, but Austin Peay again rebounded on Sunday afternoon to take the third and final game of the weekend series from the Crusaders 7-3 at Raymond C. Hand Park in Clarksville, Tenn.

Chris Manning (Lake Forest, Calif./El Toro H.S.) had two of the Crusaders’ four hits on the afternoon as Governor pitching shut down the Brown and Gold after the opening inning.

Manning led off the game with a single and Bobby Martin (Crystal Lake, Ill./Prairie Ridge H.S.) followed with a walk.  Kyle Gaedele (Arlington Heights, Ill./Rolling Meadows H.S.) delivered the first run of the game with a double down the leftfield line to score Manning. Ryan O’Gara (Buffalo Grove, Ill./Buffalo Grove H.S.) plated the second run with a ground out before Steven Scoby (Delton, Mich./Delton Kellogg H.S.) delivered a two-out single to make it 3-0 Valpo after a half an inning.

A Valpo error in the sixth led to a pair of unearned runs and the Governors tacked on one final run in the eighth.

Rolando Gautier and Greg Bachman led Austin Peay (3-0) with two hits each while Gautier and Jordan Hankins each drove in a pair of runs.

Alex Belew earned the win (1-0) for the Governors, working five innings, allowing three runs and four hits while striking out five.  Zach Toney earned the save (1), pitching the final four scoreless innings without allowing a walk or a hit and fanning seven.

Valparaiso (0-3) will head west on Friday to begin a four-game weekend series against Cal State Northridge.  First pitch on Friday is set for 4 p.m. CST.