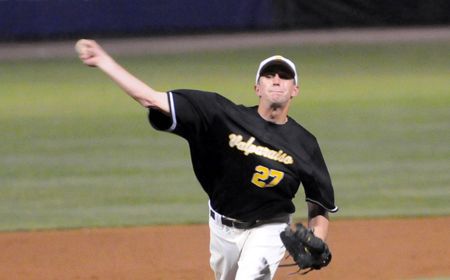 Justin Frane will get the ball in the final game of the weekend series. (Ray Acevedo)
Related Links

This Week in Crusader Baseball: Valparaiso begins its annual two-week spring trip excursion this weekend as the Crusaders face Cal State Northridge in a four-game weekend series.  Valpo is in the midst of a 23-game season-opening road trip which runs through the month of March.

Head Coach Tracy Woodson: Tracy Woodson, the 16th head coach in Valparaiso University history, is in his fifth season at the helm of the Crusaders and has a 95-128 (.426) record both for his career as well as at Valpo.  Woodson ranks fourth in school history for career wins by a head coach.  A member of the Los Angeles Dodgers 1988 World Champion team, he has also managed in the minor leagues through the AAA level.

Series Notes: This will be the first meeting on the diamond ever between Valparaiso and Cal State Northridge.

Wrapping Up Last Week’s Action: Valparaiso was swept in a three-game weekend series at Austin Peay to open the 2010 season.  The Crusaders scored first in all three games over the weekend, but could not hold on to the leads.  The Governors won the opener 7-3 on Friday evening after a rain delay of more than four hours.  Back-to-back three run innings in the fifth and sixth by Austin Peay proved to be the difference.  Game two was a wild affair, with Austin Peay scoring six times in the eighth only to have Valpo answer with three runs in the ninth to force extra innings.  The Governors plated the winning run in the 11th for an 11-10 victory.  Game three saw Austin Peay shut down Valpo’s bats after the opening inning, allowing just one hit over the final eight frames on the way to a 7-3 win.

Scoby and Manning Have Big Weekend: Steven Scoby and Chris Manning both hit .400 (6-for-15) for the Crusaders in the opening weekend of the season.  Both had hits in all three games of the series, with Scoby doubling twice and Manning scoring five times.

Gaedele and Martin Drive Home Runs: Kyle Gaedele and Bobby Martin combined to drive home nine runs against Austin Peay last weekend.  Gaedele had five RBIs while Martin added four, including his first collegiate home run, a three-run shot in the top of the ninth to force extra innings in game two of the series.

Newcomers Jump Right Into the Lineup: Three Crusader newcomers were mainstays in the lineup during the opening weekend.  Freshmen Chris Manning and Michael Morman started in centerfield and at third base respectively in all three games while junior college transfer Bobby Martin held down shortstop.  Freshmen hurlers Cyrus Wimberly and Kevin Upp both made their collegiate debuts out of the bullpen as well, while junior Kevin Wild made his Valpo debut.

Getting Runners on Base: Valpo drew 16 walks last weekend and posted a .359 on base percentage, but the Crusaders were not always able to get the runners home.  The Brown and Gold left 29 men on base over the three game series, including 12 in the opener and 14 in the extra inning affair.