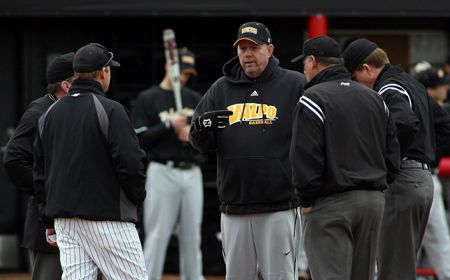 Coach Woodson talks with the umpires regarding weather conditions on Friday. (Jeff Golden)

Game one of the four-game weekend series between Valparaiso and Cal State Northridge scheduled for Friday afternoon has been postponed due to rain in the Northridge, Calif. Area.

The Crusaders led 1-0 in the top of the first inning when play was halted.  The game is slated to resume on Saturday at 2 p.m. CST with another game to follow.  Rain is in the forecast for Saturday though.

The series is then scheduled to wrap up on Sunday with another doubleheader to make up the rain out, tentatively scheduled to begin at 1 p.m. CST.