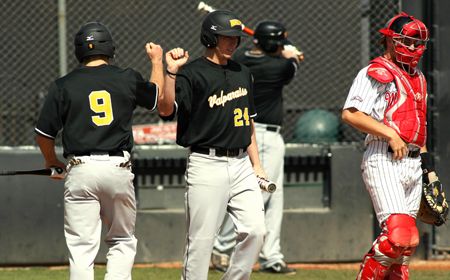 It took two days to compete, the series opener between Valparaiso and Cal State Northridge finally was completed on Saturday afternoon at Matador Field, with the host Matadors posting a 13-4 victory over the Crusaders in Northridge, Calif.

Will Hagel (Arlington Heights, Ill./Prospect H.S.) led the Crusaders offensively with two hits and two runs batted in, but Northridge scored eight times in the seventh and eighth innings combined to put the game out of reach.

The Crusaders scored two runs in the opening inning, which began on Friday.  Chris Manning (Lake Forest, Calif./El Toro H.S.) led of the game with a single and Steven Scoby (Delton, Mich./Delton Kellogg H.S.) followed with a walk.  Following a double steal, Ryan O’Gara (Buffalo Grove, Ill./Buffalo Grove H.S.) walked to load the bases.  Manning then scored on a wild pitch, at which time the game was suspended until Saturday due to rain.

Northridge answered with two runs in the bottom of the first off of Damon McCormick (Louisville, Ky./Saint Xavier H.S.), as Steven Keller hit a two run homer.  McCormick came on in relief of Jon Gulbransen (Appleton, Wis./Fox Valley Lutheran H.S.), who was the starter, but never threw a pitch due to the suspension of play.

The Matadors added a run in the third on a sacrifice fly and tacked on single runs in the fifth and sixth.  In the seventh, Northridge erupted for five runs on just three hits, all with two outs.

Valpo got two runs back in the eighth on a two-run double by Hagel, which plated Kyle Gaedele (Arlington Heights, Ill./Rolling Meadows H.S.) and Scoby, pulling the Brown and Gold to within 10-4.

The Matadors added three more runs in the bottom of the eighth, two on a home run by Chris Allen, to cap the scoring.

Ryan Juarez earned the win (1-1) for Northridge, working 6.2 innings of scoreless relief, allowing just four hits while striking out six.  He did not walk a hitter.  McCormick suffered the loss (0-1) for the Crusaders, allowing six hits and five runs, four of which were earned.  He fanned five.

Manning, Scoby, and Hagel all had two hits for the Crusaders as part of an eight-hit attack.  Scoby extended his hitting streak to nine straight games while Gaedele has now reached base safely in 15 straight contests dating back to last season.

Valparaiso (0-4) and Cal State Northridge (3-2) will play games two and three of the weekend series on Sunday with a doubleheader beginning at 1 p.m. CST.  The two schools will then wrap up the four-game series on Monday beginning at 4 p.m. CST.