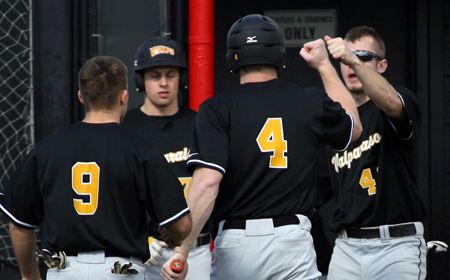 This Week in Crusader Baseball: Valparaiso continues its west coast swing heading north from Northridge, Calif. up to Bakersfield for a two-game midweek series against Cal State Bakersfield.  The Crusaders are nearing the midway point of a 13-game trip to California and Nevada while the Roadrunners are wrapping up a nine-game homestand to open the year hosting Valpo.

On the Air: Neither game at Cal State Bakersfield will be broadcast over the airways or online.  Live stats will be available through www.valpoathletics.com for each game of the series.

Head Coach Tracy Woodson: Tracy Woodson, the 16th head coach in Valparaiso University history, is in his fifth season at the helm of the Crusaders and has a 96-131 (.423) record both for his career as well as at Valpo.  Woodson ranks fourth in school history for career wins by a head coach.  A member of the Los Angeles Dodgers 1988 World Champion team, he has also managed in the minor leagues through the AAA level.

Series Notes: This will be the first meeting on the diamond ever between Valparaiso and Cal State Bakersfield.

Wrapping Up Last Weekend’s Action: Valparaiso took one of four games over the weekend at Cal State Northridge, in a series that was altered by rain.  The opener began on Friday, but only four batters stepped to the plate before the game was suspended to Saturday.  The Matadors eventually won 13-4.  Valpo took the opener of Sunday’s doubleheader 2-1 behind a complete game from Tyler Deetjen.  Northridge won game two of the twinbill 5-2.  In the series finale which got moved to Monday, the Matadors score twice in the seventh and once in the eighth after Valpo tied the game, and won 6-3.

Scouting Cal State Bakersfield: The Roadrunners have won four straight games heading into the midweek series with the Crusaders after posting a three-game sweep of Washington over the weekend.  Jeremy Rodriguez is batting .552 with nine runs scored while Oscar Sanay has a .414 batting average with 11 runs batted in.  Bakersfield is hitting .347 as a team thus far this season while the pitching staff has posted a 3.00 earned run average and limiting opponents to just a .256 batting average.

Manning Has Solid Start: Freshman Chris Manning has started off his collegiate career on a strong note, batting .375 with four runs batted in for the Crusaders in seven games.  He has three doubles and the team’s lone triple, and has been successful on all four stolen base opportunities thus far as Valpo’s leadoff hitter.  Manning leads the team with four multi-hit games including a pair of two-hit contests.

Deetjen Solid in First Start: Tyler Deetjen threw his first collegiate complete game, a seven-inning effort, to get the win at Cal State Northridge on Sunday.  The southpaw scattered just four hits and allowed just one run while striking out three.  He did not walk anyone in his second start of the season.

Gaedele Keeps Producing: A .336 career hitter heading into the week, Kyle Gaedele is off to another hot start for the Crusaders.  The junior is batting .370 on the season with a team-leading six runs batted in.  He has also drawn four walks and has a .438 on base percentage.  He also shares the team lead with four stolen bases, and is 29-for-32 swiping bags in his career.

Getting the Early Lead: Valpo scored first in each of its first six games this season, before the string of games came to an end at Northridge on Monday.  In two of the three games against the Matadors in which the Crusaders took the early lead, Northridge answered with runs in the bottom of the same inning.

This and That: Kyle Gaedele has reached base safely in 18 straight games dating back to last season ... Gaedele is currently riding an 11-game hitting streak as well, and is the only Crusader to hit safely in all seven games this year ... Ryan O’Gara had hit safely in six straight games to start the year before going hitless on Monday ... Steven Scoby is hitting .333 with four doubles on the year.