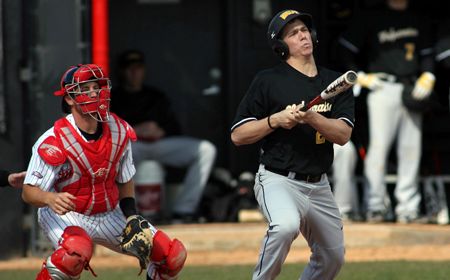 Cal State Bakersfield limited Valparaiso to just four hits on Tuesday afternoon as the Roadrunners defeated the Crusaders 9-0 in the opening game of a two-game midweek series at Hardt Field in Bakersfield, Calif.

“The pitching we are seeing out here in California is unlike anything I’ve ever seen day in and day out since I’ve been here,” head coach Tracy Woodson said.  “They are throwing 88 to 90 every day.  This should really help us when we get back to the Midwest though, as we are getting good swings and hitting the ball hard.”

The Roadrunners took advantage of 10 walks, three hit batsmen, and two wild pitches from Valpo pitchers and scored eight times in the first four innings to break the game open.

Bakersfield opened with five runs in the first.  Three straight walks after a leadoff single plated the first run followed and a single by Oscar Sanay added a second run.  DC Legg added a two-run double and, adding in a sacrifice fly, the Roadrunners opened a 5-0 lead.

The Roadrunners added two more runs in the third without a hit.   Two walks and a hit batsman loaded the bases before a fielder’s choice and wild pitch plated the runs.

The hosts added an unearned run in the fourth and their final run in the sixth to take the opener of the series.

Will Hagel (Arlington Heights, Ill./Prospect H.S.), Tuesday’s starting pitcher for the Crusaders, had two of Valpo’s four hits to lead the Brown and Gold offense.

Andrew Letourneau had the only multi-hit game for the Roadrunners, while Legg and Stuart Smith each drove home two runs.

Valparaiso (1-7) and Cal State Bakersfield (6-2) will wrap up their brief two-game series on Wednesday afternoon at Hardt Field with the first pitch slated for 4 p.m. CST.