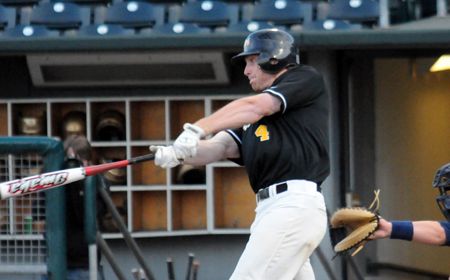 Valparaiso fought back from a large deficit after two innings on Wednesday afternoon, but it was not enough as the Crusaders fell to Cal State Bakersfield 7-4 at Hardt Field in Bakersfield, Calif.

The Roadrunners scored seven times in the first two innings before the Crusader relievers shut the door on Bakersfield bats, not allowing a hit after the second inning.

“Our bullpen was fabulous today,” head coach Tracy Woodson said.  “We only faced one batter more than the minimum after the second.  (Kevin) Wild threw great.”

Bakersfield scored four times in the opening inning to jump on the board early.  Martin Medina hit a grand slam as the fourth batter of the game, following an error and two singles.  In the second, Medina doubled home another run and the Roadrunners added a RBI groundout and a triple off the bat of Cael Brockmeyer to take the 7-0 lead.

Justin Frane (Huntertown, Ind./Carroll H.S.) led off the fourth with a walk and moved to second on a single by Bobby Martin  (Crystal Lake, Ill./Prairie Ridge H.S.). After a wild pitch moved the runners up 90 feet, Frane scored on a groundout by Michael Morman (Rockford, Ill./Boylan Catholic H.S.), pulling Valpo within 7-3.

The Crusaders added another run in the ninth.  Morman led off with a single and went to second on a throwing error.  After moving to third on a sacrifice bunt, he scored on a groundout by Scoby.  With two outs Gaedele and O’gara singled, bringing the tying run to the plate, but a flyout ended the game.

Gaedele and Martin led Valpo’s 12-hit attack with three hits each.  For Gaedele, he has extended his hitting streak to 13 straight games dating back to 2010 and his on base streak has now reached 20 games.  For Martin, it was his first three-hit game as a Crusader.

Medina led Bakersfield with his five runs batted in as the Roadrunners had eight hits, all in the first two frames.

Cael Brockmeyer started and earned the win (1-0) for Cal State Northridge (7-2) while Will Hagel (Arlington Heights, Ill./Prospect H.S.) suffered the loss (0-1) for the Crusaders.

“We actually played pretty well today,” Woodson said.  “Hagel got a couple of balls up in the zone, but at least he threw strikes.  We turned a couple of double plays and I felt like we played better as a whole.”

Valparaiso (1-8) will have Thursday off before heading to San Luis Obsipo, Calif. over the weekend for a three-game series with Cal Poly.  First pitch in the series opener on Friday night is set for 8 p.m. CST.