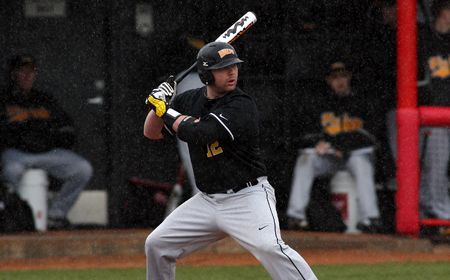 Robbie Robinson and the Crusaders look to pick up a series win at Cal Poly. (Jeff Golden)
Related Links

This Week in Crusader Baseball: After a break from action on Thursday, Valparaiso’s first complete off day in a week, the Crusaders return to the diamond this weekend, moving to the coast of California for a three-game weekend series with Cal Poly in San Luis Obispo.  Both teams are still looking for its first series win of the season.

Head Coach Tracy Woodson: Tracy Woodson, the 16th head coach in Valparaiso University history, is in his fifth season at the helm of the Crusaders and has a 96-133 (.419) record both for his career as well as at Valpo.  Woodson ranks fourth in school history for career wins by a head coach.  A member of the Los Angeles Dodgers 1988 World Champion team, he has also managed in the minor leagues through the AAA level.

Series Notes: This will be the first meeting on the diamond ever between Valparaiso and Cal Poly.

Scouting Cal Poly: The Mustangs picked up their first victory of the season Tuesday, 11-4, at #21 Fresno State after suffering five one-run losses in the first six games, all against teams in the NCAA regional last year.  Mike Miller is off to a hot start with the bat for Cal Poly, batting .609 (14-for-23) with four doubles and four runs batted in.  As a team the Mustangs are hitting just .262 but have a .342 on base percentage.  The pitching staff has a 5.43 earned run average but reliever Frankie Reed has just a 1.17 ERA in four appearances.

Wild Leads Relief Corps: Junior college transfer Kevin Wild has been solid for the Crusaders in relief through his first four appearances.  Wednesday against Bakersfield he worked three hitless innings, allowing just one walk and striking out six as Valpo’s bullpen worked six scoreless innings without allowing a hit.  Wild has a 1.80 earned run average and opponents are hitting just .071 against his thus far this year.

Deetjen Looks to Build off of Solid First Start: Tyler Deetjen threw his first collegiate complete game, a seven-inning effort, to get the win at Cal State Northridge on Sunday, and will look to carry that momentum into his start this Saturday.  The southpaw scattered just four hits and allowed just one run while striking out three.  He did not walk anyone in his second start of the season.

Gaedele Keeps Producing: A .339 career hitter heading into the weekend, Kyle Gaedele is off to another hot start for the Crusaders.  The junior is batting .400 on the season with a team-leading six runs batted in.

Go Speed Racers: Kyle Gaedele and Chris Manning have the Crusaders off and running on the base paths.  As a team Valpo is 16-for-20 in stolen base attempts, with Gaedele 6-for-7 on the season and Manning 4-for-5.  Gaedele is now 31-for-34 swiping bases in his two plus year career with the Brown and Gold.

Gulbransen Moving Up Innings Pitched List: Jon Gulbransen ranks ninth on Valpo’s career innings pitched list with 246.2 at Valpo.  He Just passed Joe Lazewski (1995-1998) who threw 245.0 innings during his career and is just two-thirds of an inning behind Chuck Donley (1991-1995) for eight place.

This and That: Kyle Gaedele has reached base safely in 20 straight games dating back to last season ... Gaedele is currently riding an 13-game hitting streak as well, and is the only Crusader to hit safely in all nine games this year ... Bobby Martin had his first three-hit game as a Crusader Wednesday at Bakersfield ... Steven Scoby leads Valpo with four doubles.