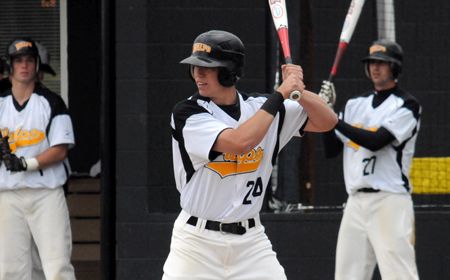 Will Hagel had a double and a triple for the Crusaders. (Ray Acevedo)
Valparaiso at Cal Poly | March 04, 2011
Related Links
Related Links

Valparaiso held a one-run lead midway through Friday evening’s series opener at Cal Poly, but the Mustangs scored three times in the fifth and added four more runs  in the seventh on the way to an 8-3 victory over the Crusaders at Baggett Stadium in San Luis Obispo, Calif.

Will Hagel (Arlington Heights, Ill./Prospect H.S.) had two hits to lead Valpo’s offense, driving in one of the three Crusader runs.

Valpo jumped on top in the top of the third.  Chris Manning (Lake Forest, Calif./El Toro H.S.) hit his second triple of the season with one out and scored one batter later on a groundout by Steven Scoby (Delton, Mich./Delton Kellogg H.S.).

The Mustangs tied the game in the bottom of the inning with a hit batsman followed by a RBI double from Bobby Crocker, who finished the game 3-for-5 for Cal Poly.

The Crusaders took a 2-1 advantage in the top of the fourth, plating an unearned run.  Robbie Robinson (Brea, Calif./Olinda H.S.) reached when the leftfielder dropped a fly ball and then scored one batter later on a triple by Hagel, the first three-bagger of his career.

Elliot Stewart tied the game in the fifth with a one-out home run before the Mustangs added two more runs in the inning.  Back-to-back singles followed by a two-out double from Mitch Haniger put Cal Poly on top 4-2.  The hosts added four more runs in the seventh to increase the advantage to six.

Valpo added a late run in the ninth as Ryan O’Gara (Buffalo Grove, Ill./Buffalo Grove H.S.) reached on an error, moved to third on a double by Hagel, and scored on a pinch hit single by Ben Olejniczak (Valparaiso, Ind./Valparaiso H.S.).  The Crusaders could not tack on any more runs though.

Kyle Gaedele (Arlington Heights, Ill./Rolling Meadows H.S.) had both his 13-game hitting streak and 20-game on base streak snapped in the game for the Crusaders.

Valparaiso (1-9) and Cal Poly (2-6) will continue the three-game weekend series on Saturday evening with first pitch slated for 8 p.m. CST.