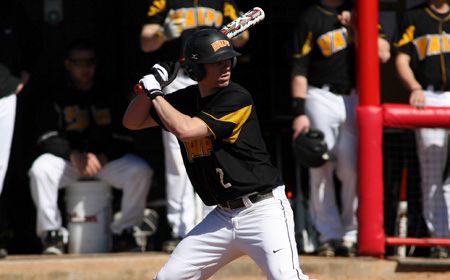 Chris Manning is off to a solid start in his freshman season. (Jeff Golden)
Related Links

This Week in Crusader Baseball: Valparaiso will wrap up its two week spring break trip this weekend with a four-game series at UNLV.  The Crusaders will look to build some momentum and snap their losing skid before returning to the Midwest while the Rebels are off to a hot start this season after downing #14 Arizona on Wednesday.

Head Coach Tracy Woodson: Tracy Woodson, the 16th head coach in Valparaiso University history, is in his fifth season at the helm of the Crusaders and has a 96-136 (.414) record both for his career as well as at Valpo.  Woodson ranks fourth in school history for career wins by a head coach.  A member of the Los Angeles Dodgers 1988 World Champion team, he has also managed in the minor leagues through the AAA level.

Probable Starters: Damon McCormick (RHP, 0-2, 7.11) will take the mound for the Crusaders in the series opener on Friday.  On Saturday, Tyler Deetjen (LHP, 1-2, 7.31) and Jon Gulbransen (LHP, 0-2, 4.41) are slated to toe the rubber for Valpo while Justin Frane (RHP, 0-2, 2.40) will be handed the ball on Sunday for the series finale.  At this time UNLV has not announced its starting rotation.

Series Notes: This will be the first meeting on the diamond ever between Valparaiso and UNLV.

Wrapping Up Cal Poly: The Mustangs got three days worth of solid pitching performances last weekend to sweep the Crusaders in the three-game series.  In the opener on Friday, Cal Poly scored three in the fifth and four in the seventh on the way to an 8-3 victory.  Saturday, three pitchers combined to scatter six hits as the Mustangs shutout Valpo 11-0.  Sunday’s series finale saw the Crusaders commit five errors in a 7-1 setback.

Scouting UNLV: The Rebels have won five of their last six games following a 9-7 victory over #14 Arizona on Wednesday night.  UNLV is hitting .320 as a team with 15 home runs and 121 runs scored in 15 games.  Rance Roundy leads the way batting .527 with 10 doubles, five homers, and 21 runs batted in.  Trent Cook has hit at a .404 clip with 16 RBIs.  The Rebels pitching staff has been solid, led by Tanner Peters who is 3-0 and has not allowed an earned run in 21.0 innings of work.

Walking Machine: Ryan O’Gara may be hitting just .194 heading into the weekend for the Crusaders, but he is doing his job getting on base.  He ranks second on the team with a .383 on base percentage after drawing 11 walks in 11 games.

Frane Does a Little of Everything: Justin Frane has started on the mound, came on in relief, and appeared at the plate already this season.  Having made one start and four relief appearances, the senior has a 2.40 ERA in 15 innings.  At the plate he is hitting .400.

Gaedele Keeps Producing: A .336 career hitter heading into the weekend, Kyle Gaedele is off to another hot start for the Crusaders.  The junior is batting .356 on the season with a team-leading six runs batted in.

Go Speed Racers: Kyle Gaedele and Chris Manning have the Crusaders off and running on the base paths.  As a team Valpo is 19-for-23 in stolen base attempts, with Gaedele 7-for-8 on the season and Manning 4-for-5.  Gaedele is now 32-for-35 swiping bases in his two plus year career with Valpo.

Career Lists Part Two: Jon Gulbransen also continues to climb the career strikeouts list at Valpo.  The southpaw has fanned 196 hitters during his career, ninth most all-time.  He is six Ks away from matching Jim Pomeroy’s (1996-1999) 202 strikeouts for eighth on the career charts.

This and That: Ben Olejniczak has come off of the bench and is 2-for-4 in a pinch hitting role this year ... Chris Manning is hitting .385 against left-handed hurlers ... Robbie Robinson has reached base in four straight games ... Kyle Gaedele and Bobby Martin each have four-hit games this season.