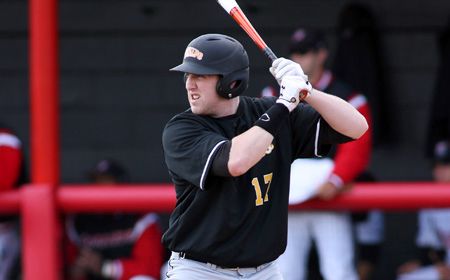 Valparaiso opened a four-game weekend series at UNLV on Friday evening, but the Rebels limited the Crusaders to just six hits on the evening while posting a 12-2 win over the Brown and Gold at Wilson Stadium in Las Vegas, Nev.

The Crusaders were held off of the scoreboard until the eighth inning when Valpo plated a pair of unearned runs.  Chris Manning (Lake Forest, Calif./El Toro H.S.) singled to right with one out before scoring on a two-out error as Kyle Gaedele (Arlington Heights, Ill./Rolling Meadows H.S.) reached.  Gaedele then scored on a double down the right field line by Ryan O’Gara (Buffalo Grove, Ill./Buffalo Grove H.S.).

The Rebels maintained their 4-0 lead into the sixth inning when the hosts plated five more runs, capitalizing on four hits and a Crusader error.  UNLV added three more in the seventh, all on a home run by Brandon Bayardi to take a 12-0 lead before Valpo found the scoreboard in the eighth.

Will Hagel (Arlington Heights, Ill./Prospect H.S.) had a pair of hits for the Brown and Gold in the loss.  Kirk went 3-for-6 with three runs and four batted in for UNLV while Richie Jimenez also had a three-hit game as part of the Rebels 12-hit attack.

Tanner Peters earned the win (4-0) for UNLV, pitching eight innings and allowing just the two unearned runs and five hits.  He struck out nine and has not allowed an earned run all season.

Valparaiso (1-12) and UNLV (13-3) will continue the weekend series Saturday afternoon with a doubleheader at Wilson Stadium.  First pitch of the opener is set for 4:05 p.m. CST.