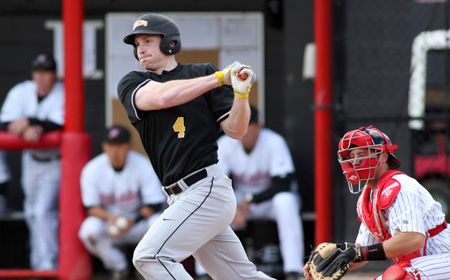 Kyle Gaedele (Arlington Heights, Ill./Rolling Meadows H.S.) had four hits, including three for extra bases, and drove in four runs in Saturday’s doubleheader, but Valparaiso dropped both ends of the twinbill 11-5 and 7-4 to UNLV at Wilson Stadium in Las Vegas, Nev.

Gaedele had two doubles and a home run in addition to scoring twice and two stolen bases between the two games.

Valparaiso took the lead in the top of the first of game one with a pair of runs.  Steven Scoby (Delton, Mich./Delton Kellogg H.S.) singled with one out and moved to third on a double by Gaedele.  Ryan O’Gara (Buffalo Grove, Ill./Buffalo Grove H.S.) plated both runners with a single to left.

The Rebels tied the game in the bottom of the inning with a pair of runs and took the lead in the second.  Three runs on three hits in the second put the hosts on top 5-2, a lead they would not surrender the rest of the game.  A four-run third expanded the lead as UNLV pounded out five hits in the inning.

The Crusaders added a run in the sixth as Chris Manning (Lake Forest, Calif./El Toro H.S.) led off with a single and Scoby walked.  Following a double steal, Gaedele scored Manning on a fielder’s choice.

After UNLV scored a pair of runs in the seventh, Valpo added its final two runs in the ninth.  O’Gara walked and Robbie Robinson (Brea, Calif./Olinda H.S.) was hit by a pitch.  Will Hagel (Arlington Heights, Ill./Prospect H.S.) delivered a RBI single before Bobby Martin (Crystal Lake, Ill./Prairie Ridge H.S.) was hit by another pitch to load the bases. The final run scored on a double play.

Scott Dysinger went 3-for-4 with three runs batted in to lead UNLV’s 13-hit attack while Valpo managed just five hits in the opener.

In the night cap Valpo again scored in the opening inning.  Scoby walked and Gaedele followed with a run-scoring double to left-center.

The Rebels answered in the bottom of the first with a pair of unearned runs to take the lead, taking advantage of the first of four Valpo errors in the game.

Gaedele gave Valpo the lead in the third with a two-run blast to left, scoring Scoby who reached on a bunt single.

The Crusaders expanded the lead to 4-2 in the sixth.  Scoby singled with two outs, scoring Andrew Bain (Indianapolis, Ind./Park Tudor H.S.) who reached on a walk.  Valpo then loaded the bases loaded but the Rebels escaped the jam with a fly out to end the inning.

Tyler Deetjen (Saint Charles, Ill./East H.S.) settled down on the hill after the first inning, not allowing another run until the seventh.  UNLV then scored five times in the inning to take the lead, which it would not relinquish, scoring a couple of unearned runs following another Valpo error.

Max Javate earned the win (1-1) in relief for the Rebels, pitching 1.1 innings of scoreless baseball.  Zack Hartman earned his fifth save tossing the final two innings.  Deetjen suffered the loss (1-3) allowing five runs in six innings plus on the mound.

Gaedele finished game two 3-for-4 with three runs batted in while Scoby scored twice and had two hits as Valpo finished with nine for the game.  Trent Cook went 2-for-4 with two RBIs to pace the Rebels.