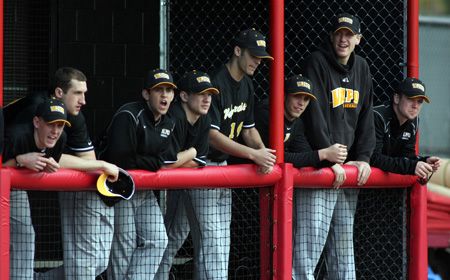 Valpo looks to return to winning ways over the weekend in Edwardsville. (Jeff Golden)
Related Links

This Week in Crusader Baseball: Valparaiso spends its final weekend of action before Horizon League play begins by traveling to Edwardsville, Ill. for three games.  The Crusaders will face host SIU Edwardsville on both Friday and Sunday while playing a neutral site contest versus Creighton in a Saturday matinee.

On the Air: There will be no live broadcasts of any of the three games this weekend.  Live stats will be available through www.valpoathletics.com for each game.

Head Coach Tracy Woodson: Tracy Woodson, the 16th head coach in Valparaiso University history, is in his fifth season at the helm of the Crusaders and has a 96-140 (.407) record both for his career as well as at Valpo.  Woodson ranks fourth in school history for career wins by a head coach.  A member of the Los Angeles Dodgers 1988 World Champion team, he has also managed in the minor leagues through the AAA level.

Series Notes: This will be the first meeting on the diamond ever between both Valparaiso and SIU Edwardsville as well as the Crusaders and Creighton.

Wrapping Up UNLV: The Crusaders were swept in a four-game series against the Rebels to close the spring trip.  Valpo fell 12-2 in the opener on Friday before dropping a twinbill 11-5 and 7-4 on Saturday.  In Sunday’s finale, UNLV scored an unearned run in the 11th inning to post a 6-5 win.

Scouting SIU Edwardsville: The Cougars had a three-game winning streak snapped on Wednesday with an 8-2 loss at Illinois State.  As a team SIUE is batting .264 on the season, led by Devin Caldwell who is hitting at a .367 clip with 10 runs batted in.  Joel Greatting bats .310 with two homers and 11 RBIs.  The pitching staff has posted a 7.36 earned run average thus far this year, allowing opposing hitters to bat .315 against the Cougars.  Spencer Patton leads the staff with a 1.66 ERA and a .211 batting average against.

Scouting Creighton: The Bluejays have won four of their last five games following a doubleheader split at Air Force on Wednesday.  A team batting .291 on the year, Creighton is led by Michael Mutcheson who is hitting .375 this year.  Alex Staehely adds a .373 batting clip with 18 runs batted in.  The Bluejay pitching staff sports a 3.30 ERA and is allowing opponents to bat just .244 against them.

Walking Machine: Ryan O’Gara may be hitting just .200 heading into the weekend for the Crusaders, but he is doing his job getting on base.  He has a .379 on base percentage after drawing 15 walks in the 15 games he has played.

Gaedele Keeps Producing: A .333 career hitter heading into the weekend, Kyle Gaedele leads the Crusaders hitting .328 this season.  He also has a team-high five doubles and 11 runs batted in.

Keeping Things Constant: Valpo’s outfield of Steven Scoby in left, Chris Manning in center, and Kyle Gaedele in right have started all 16 games this season.  Gaedele has even hit in the three hole in every game offensively.  Bobby Martin has also started every game at shortstop for the Brown and Gold.

Go Speed Racers: Kyle Gaedele and Chris Manning have the Crusaders off and running on the base paths.  As a team Valpo is 26-for-30 in stolen base attempts, with Gaedele 9-for-10 on the season and Manning 6-for-7.  Gaedele is now 34-for-37 swiping bases in his two plus year career with Valpo.

Career Lists Part Two: Jon Gulbransen also continues to climb the career strikeouts list at Valpo.  The southpaw has fanned 202 hitters during his career,  matching Jim Pomeroy (1996-1999) for eighth on the career charts.  The southpaw is 10 strikeouts behind Chuck Donley (1991-1995) for seventh all-time.

This and That: Ryan O’Gara and Robbie Robinson have both reached base safely in seven straight games ... Will Hagel has the team’s longest current hitting streak four ... Kyle Gaedele and Steven Scoby both have six multi-hit games on the season ... Valpo has the 25th toughest strength of schedule to date through Wednesday.