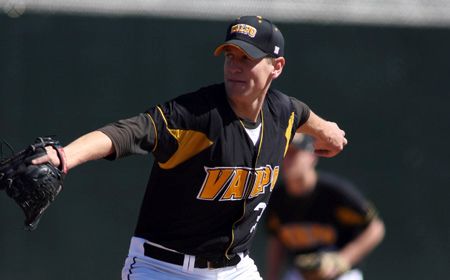 Tyler Deetjen (Saint Charles, Ill./East H.S.) allowed just one run on Friday evening while throwing his second complete game of the season, but that would be all the runs SIU Edwardsville would need, as the Cougars defeated Valparaiso 1-0 at the Simmons Cooper Complex in Edwardsville, Ill.

“We just do not score runs for Deetjen,” head coach Tracy Woodson said.  “He had it going today.  He used all three pitches effectively.”

SIU Edwardsville (5-13) starter Spencer Patton was just as strong, throwing nine shutout innings to earn the win (2-2), scattering just five hits and not walking anyone while striking out 12 Crusaders.

The Cougars scored their only run in the seventh as Travis Becherer led off with a bunt single and moved to second on a sacrifice bunt.  After Becherer stole third, he scored on a fielder’s choice off the bat of Mitch Matecki to account for the game’s only tally.

Valpo’s best scoring threats came in the fourth and ninth innings.  Kyle Gaedele (Arlington Heights, Ill./Rolling Meadows doubled with one out in the fourth, but was not able to advance.  In the ninth, Steven Scoby (Delton, Mich./Delton Kellogg H.S.), who was the only Crusader with two hits, tripled with two outs, but a strikeout ended the game.

“We’re just not driving in runs when we need to,” Woodson added.

Valparaiso (1-16) will return to the Simmons Cooper Complex on Saturday for a 1 p.m. neutral site contest against Creighton.