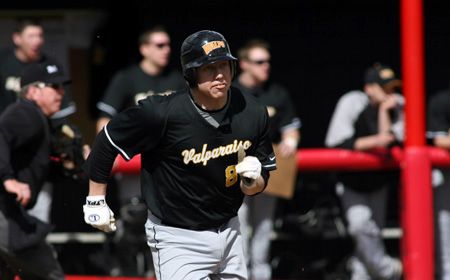 Two runs in the sixth inning and three more in the seventh broke open a tie game on Friday afternoon as Butler defeated Valparaiso 6-2 at Bulldog Park in Indianapolis, Ind. in the opening game of Horizon League action.

“We battled back to tie the game once after falling behind and closed within one a second time, but could not get the key hits we needed late,” head coach Tracy Woodson said.  “We need to be able to execute.  We can’t give up free outs.  That is hurting us.”

On a cold afternoon, Butler scored the game’s first run in the second inning.  Michael Letzter singled, and scored one batter later as Nick Hladek doubled down the left field line.

The Crusaders tied the game in the fourth with three straight one out singles.  Kyle Gaedele (Arlington Heights, Ill./Rolling Meadows H.S.) started the hit parade and Will Hagel (Arlington Heights, Ill./Prospect H.S.) followed with another hit, putting runners on the corners.  Robbie Robinson (Brea, Calif./Olina H.S.) scored Gaedele with a single up the middle, off of the glove of a leaping second baseman.

Karch Kowalczyk (Peru, Ill./La Salle-Peru H.S.) cut Valpo’s deficit in half with his first home run of the season in the seventh.

Butler broke the game open in the seventh with three more runs.  A RBI single by Corey Moylan and a two-run double off the bat of Grant Fillipitch, accounted for the game’s final runs.

The Crusaders had chances, leaving runners on second and third in the fourth and on the corners in the seventh without scoring any more runs in either inning, four of eight total base runners they would leave on the perches.

Hagel and Ryan O’Gara (Buffalo Grove, Ill./Buffalo Grove H.S.) each had two hits for the Crusaders as part of a nine-hit attack.  Butler also had nine hits in the game.

Deetjen went 6.1 innings while suffering the loss (1-5), allowing all six runs, only four of which were earned, and nine hits.  He did not walk or strikeout any Bulldogs.

“Deetjen threw strikes,” Woodson added.  “We got a couple of balls up late, but if we make plays behind him it makes it easier on him.”