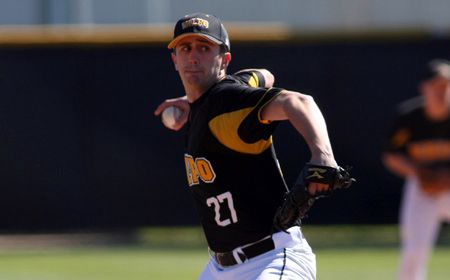 Valparaiso scored eight times in the final three innings of game one of a doubleheader on Saturday to come from behind and earn a 12-5 victory over Butler at Bulldog Park in Indianapolis, Ind.  The Bulldogs came back and won the night cap 14-7 though, to take the series.

Butler answered in the bottom of the inning as Grant Fillipitch hit a two-run homer to left to tie the game.

Valpo again scored two runs with two outs in the fifth.  Michael Morman (Rockford, Ill./Boylan Catholic H.S.) doubled to lead off the inning.  After a two out walk to Kyle Gaedele (Arlington Heights, Ill./Rolling Meadows H.S.), Scoby came through with a hit to left to score both runners.

The Bulldogs took a 5-4 lead in the sixth, scoring three times, including a two-run double by Michael Letzter.

Corey Thibault (Tustin, Calif./Foothill H.S.) led off the seventh with his first home run as a Crusader, tying the game at five.  Andrew Bain (Indianapolis, Ind./Park Tudor H.S.) struck out, but reached base as the throw to first went wide.  After moving to second on a balk, he then scored on a two out error.

Justin Frane (Huntertown, Ind./Carroll H.S.) came on in relief for the Crusaders and shut down the Bulldogs.  He allowed a leadoff triple in the eighth, but then induced two ground balls with the infield in and added a strikeout.  Frane fanned six in three innings of work to earn his first collegiate save.

“Frane was unbelievable,” Woodson said.  “He was dominant and made his pitches.  He did a great job getting out of the inning after the leadoff triple.  That gave us a lift and the excitement showed in the dugout.  We then kept adding on runs.”

Valpo did just that, adding six runs in the ninth.  Gaedele walked and Scoby and Manning followed with bunt singles, the latter scoring Gaedele following an error after a dropped throw.  Will Hagel (Buffalo Grove, Ill./Buffalo Grove H.S.) added a two-run single and O’Gara delivered his third RBI of the game with a single.  Thibault capped the scoring with his second homer of the game in the ninth, a two-run shot.

Scoby finished the game with three hits while Manning, O’Gara, and Thibault all had two hits a piece as part of a 12-hit attack.

Damon McCormick (Louisville, Ky./Saint Xavier H.S.) earned the win (1-4), pitching six innings of five-run, four-hit ball.  He struck out five and walked just one.  Frane then earned the save.

Marcos Calderon suffered the loss (0-1) in relief for the Bulldogs.

In game two, Gaedele put Valpo on top hitting the fourth pitch of the game over the left-centerfield wall for a home run.  Butler tied the game in the bottom of the first on a RBI single by Fillipitch.

An error in the third allowed the Crusaders to retake the lead and a two-run single by Bain in the fourth gave the Brown and Gold a 4-1 advantage.

Butler (9-10, 2-1 Horizon) took control in the fourth though, sending 13 batters to the plate and scoring nine times.  A three-run homer by Letzter and a two-run pinch hit double by Pat Gelwicks were the big blows as the Bulldogs took advantage of a Crusader error to score six unearned runs in the frame.

“We didn’t make the pitches or plays that we needed to in that second game,” Woodson concluded.

The Crusaders got two runs back in the fifth on three hits.  Robbie Robinson (Brea, Calif./Olinda H.S.) beat out an infield single, and when the first baseman dropped the ball Manning scored the first run of the inning.  O’Gara added his fourth RBI of the day with a double to pull Valpo within 10-6.

The Bulldogs scored three times in the bottom of the fifth though to put the game out of reach and added another in the eighth.

Valpo scored its final run in the ninth on a two-out single by Hagel to plate Scoby.

Robinson was the only Crusader with two hits in the night cap, as Valpo managed nine hits total in the game.

Valparaiso (3-19, 1-2) will close out its 23-game season-opening road trip on Wednesday afternoon traveling to Evanston, Ill. for a 3 p.m. game against Northwestern.