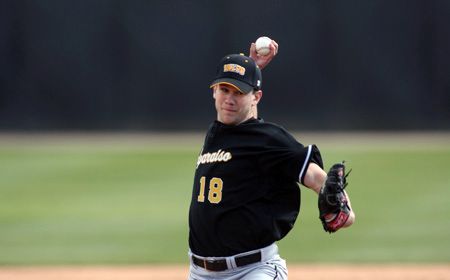 Up Next in Crusader Baseball: Valparaiso returns to Emory G. Bauer Field for the first time in 2011 this weekend as the Crusaders host UIC in a three-game Horizon League series.  Valpo is beginning a five-game homestand against the conference leader and will play 10 of its next 13 contests at the friendly confines.

Head Coach Tracy Woodson: Tracy Woodson, the 16th head coach in Valparaiso University history, is in his fifth season at the helm of the Crusaders and has a 99-144 (.407) record both for his career as well as at Valpo.  Woodson ranks fourth in school history for career wins by a head coach.  A member of the Los Angeles Dodgers 1988 World Champion team, he has also managed in the minor leagues through the AAA level.

Series Notes: UIC leads the all-time series with Valpo 50-41 dating back to 1977.  Last season the Crusaders and Flames split four games during year.  UIC won the regular season three-game series in Chicago after a doubleheader slated for earlier in the year at Valpo was canceled due to weather.  The Flames took the opener 13-10.  Valpo rebounded to win game one of a doubleheader two days later 9-8 before the Flames won the series finale 10-5.  Valpo evened the series on May 28 though, in the Horizon League Tournament, defeating UIC 10-5 to eliminate the Flames from the championship.  Valpo has not defeated UIC at Emory G. Bauer Field since April 25, 2002 when the Crusaders posted a 16-11 triumph.

Wrapping Up Northwestern: Jon Gulbransen worked seven innings while matching a career high with 10 strikeouts on Wednesday as the Crusaders defeated the Wildcats 5-2 at Rocky Miller Park in Evanston, Ill.  He allowed just three hits and walked two.  Kyle Gaedele had a three-run double in the fourth to give the Crusaders the lead and Chris Manning added a RBI single in the seventh.  Michael Morman drove home the first run of the game with a fielder’s choice.

Scouting UIC: The Flames enter the weekend the hottest team in the Horizon League, having won eight straight games following a 4-1 victory at home against Chicago State on Wednesday.  Alex De LaRosa is hitting .371 on the season for a team that is batting .288 on the year.  Jason Ganek has homered four times and driven in 18 runs.  The Flames’ pitching staff has posted a 4.42 earned run average on the year and are allowing opponents to bat .295 against them.  Chris Hoffman has a 3-1 record with a 1.56 ERA in 14 appearances out of the bullpen.

Sitting Them Down: Valparaiso pitchers struck out a season-high 14 batters on Wednesday in the win against Northwestern.  Jon Gulbransen matched his career high with 10 strikeouts while Karch Kowalczyk added four Ks in relief.  As a team Crusader hurlers have fanned 145 batters this season, second in the Horizon League.

Thibault Has a Hot Bat: Corey Thibault had just seven hits in all of 2010 and only three this season before last weekend.  However he senior catcher has four hits in his last eight at bats dating back to last weekend with two homers and a double.  He has driven in three runs, more than his total in all of 2010 and scored three runs during the span.

Manning Goes for Three: Chris Manning hit his Horizon League-leading third triple of the season against Butler.  He is halfway to moving into the top-five on Valpo’s single season charts as Kevin Perri (2005) and Paul Swenson (2005) both had six three-baggers to tie for fourth on the yearly charts.

Don’t Blink or You’ll Miss It: Valparaiso’s baseball game times continue to move along.  The Crusaders are averaging just 2:24 for the 20 nine-inning games in which they have played this season.  Valpo has gone over three hours just three times this year, two of which were 11-inning contests.

Leading the League: Valpo has several players leading the Horizon League in statistical categories.  Ryan O’Gara shares the top spot having drawn 17 walks on the year while Kyle Gaedele has a league-best 14 stolen bases.   Jon Gulbransen has thrown a league-high 40.2 innings on the mound.  As a team the Crusaders lead the conference with six triples and the pitching staff has limited opponents to a league-low .278 batting average.

No Changes in the Outfield: Valpo’s outfield of Steven Scoby in left, Chris Manning in center, and Kyle Gaedele in right have started all 23 games this season.

Go Speed Racers: Kyle Gaedele and Chris Manning have the Crusaders off and running on the base paths.  As a team Valpo is 34-for-40 in stolen base attempts, with Gaedele 14-for-15 on the season and Manning 8-for-10.  Gaedele is now 39-for-42 swiping bases in his career after stealing three bases Wednesday at Northwestern.

Career Lists Part Two: Jon Gulbransen also continues to climb the career strikeouts list at Valpo.  The southpaw has fanned 219 hitters during his career,  passing Richard Beumer (1959-1962) for sixth on the career charts.  The southpaw is just three strikeouts behind Tom Starck (2001-2004) for a spot in the top-five.