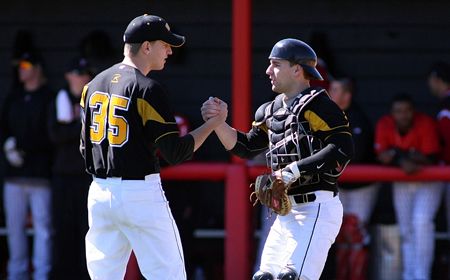 Every batter had at least one hit as Valparaiso pounded out 17 hits on Sunday morning and Tyler Deetjen (Saint Charles, Ill./East H.S.) surrendered just one run in eight innings of work as the Crusaders defeated UIC 13-1 at Emory G. Bauer Field, allowing the Brown and Gold to earn a series victory over the Flames.

Deetjen allowed just three hits and walked two while striking out eight on his way to the victory (2-5).  He took a no-hitter into the fifth inning.  He did not allow a runner past second base until a two-out RBI double by Matt Serna in the top of the eighth, accounting for the Flames’ lone run.

“Deetjen was really good with the wind blowing out hard to left,” head coach Tracy Woodson said.  “He really kept the ball down.”

Valpo took advantage of a UIC error in the second for the first run as Robbie Robinson (Brea, Calif./Olinda H.S.) reached on the miscue, went to second on a wild pitch, and scored on a single by Thibault.

Gaedele increased the advantage to four in the fourth with a towering three-run home run to leftfield.  The Crusaders added three more runs in the sixth, one on a RBI single by Bain and two more on a hit by Hagel.

“We put the ball in play all weekend,” Woodson added.  “Today we didn’t stop hitting and continued to add on after getting that early 4-0 lead.”