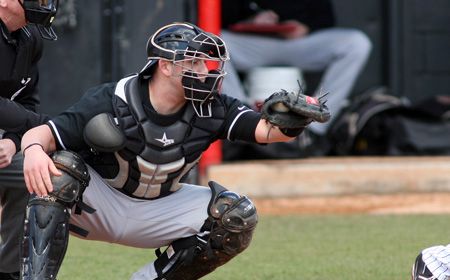 Up Next in Crusader Baseball: Valparaiso steps out of conference for a pair of midweek home games on Tuesday and Wednesday to wrap up a five-game homestand.  The Crusaders will entertain Missouri Valley Conference foe Indiana State on Tuesday before hosting Wabash on Wednesday afternoon.

Head Coach Tracy Woodson: Tracy Woodson, the 16th head coach in Valparaiso University history, is in his fifth season at the helm of the Crusaders and has a 101-145 (.411) record both for his career as well as at Valpo.  Woodson ranks fourth in school history for career wins by a head coach.  A member of the Los Angeles Dodgers 1988 World Champion team, he has also managed in the minor leagues through the AAA level.

Series Notes: Indiana State leads the all-time series with Valpo 38-30-1 dating back to 1947.  The two schools have not met since 2007 when the Sycamores won four out of five games against the Crusaders.  Indiana State took three of four games in Terre Haute, Ind.  before posting a 5-1 win on April 10 at Emory G. Bauer Field.  Valpo holds a 20-5 all-time advantage against Wabash dating back to 1950.  Last year the Crusaders beat the Little Giants 14-6 on April 5 at Emory G. Bauer Field.

Wrapping Up UIC: Valparaiso opened the home slate winning two out of three from the Flames to move back to .500 in Horizon League play.  After Friday’s game was rained out, Valpo took the opener of a doubleheader 5-2 on Saturday.  Andrew Bain drove home a pair of runs and Steve Godawa earned his first win of the year pitching 3.1 innings of scoreless relief.  UIC won the night cap of the twinbill 5-0 behind a three-hit complete game shutout by Matt Salemi.  In Sunday’s make up of the rain out, Tyler Deetjen pitched eight innings, allowing just one run and three hits as the Crusaders posted a 13-1 victory.  Every Valpo hitter had at least one hit and Kyle Gaedele added a three-run homer.

Scouting Indiana State: The Sycamores enter Tuesday’s game having won four straight contests, including a three-game sweep of Rockhurst last Thursday and Friday.  Indiana State is batting .300 as a team, led by Koby Kraemer who is hitting .378.  Robby Ort has a team-high five homers and 31 runs batted in.  The Sycamores’ pitching staff has posted a 3.79 ERA thus far this season while holding opponents to a .243 batting average.

Scouting Wabash: The Little Giants have won three of their last four games after splitting a doubleheader against Ohio Wesleyan at home on Sunday.  As a team Wabash is hitting .331 led by Chris Deig’s .372 average.  John Holm is batting .367 with five home runs and 33 runs batted in, the team leader in both categories.  Wabash’s pitching staff has posted a 7.15 earned run average this year with opponents hitting .327 against them.

Quality Pitching in League Play: Valpo’s pitching staff has notched a 3.46 ERA through the first two Horizon League series against Butler and UIC.  Justin Frane has a 1.17 conference ERA to lead the way among those who have started at least one game.  The staff has limited conference foes to just a .225 batting average and have struck out 49 hitters in six games.

Backstop Duo: Valpo’s catching tandem of Robbie Robinson and Corey Thibault have been solid at the plate in Horizon League play.  Thibault is hitting .500 (6-for-12) with two homers and five runs batted in while scoring five times.  Robinson is batting .400 (6-for-15) with four runs scored.

Cutting Down on Strikeouts: Valparaiso entered the weekend series with UIC having struck out 186 times in 23 games, an average of 8.1 per contest.  The Crusaders put the ball in play a great deal more over the weekend though, fanning just seven times total in the three-game set with the Flames.  In Saturday’s doubleheader, the Crusaders struck out just three times combined in the two games.

Finally Getting Runners Home: Valpo entered Butler series seven games ago batting just .182 with runners in scoring position.  The Crusaders have had much more success against the Bulldogs, Northwestern, and UIC though, hitting .364 (24-for-66) in this situation, and raising the team average more than 50 points to .234 with men on second and/or third.

Protecting The Late Lead: Valparaiso is a perfect 5-0 when leading after eight innings.

Don’t Blink or You’ll Miss It: Valparaiso’s baseball game times continue to move along.  The Crusaders are averaging just 2:24 for the 23 nine-inning games in which they have played this season.  Valpo has gone over three hours just three times this year, two of which were 11-inning contests.

Leading the League: Valpo has several players leading the Horizon League in statistical categories.  Chris Manning has a league-high three triples while Michael Morman is tied for the top spot with six sacrifice bunts.  Kyle Gaedele leads the conference with 16 steals, six more than his closest pursuer.  Damon McCormick has thrown a league-high 46.2 innings on the mound.  As a team, Valpo leads the conference in steals (38), strikeouts by its pitchers (177) and opponents batting average (.266).

Go Speed Racers: Kyle Gaedele and Chris Manning have the Crusaders off and running on the base paths.  Gaedele is already 16-for-17 swiping bases, and is now 41-for-44 during his three-year career with the Brown and Gold.  Manning has nearly been as successful, stealing 10-of-12 attempted bases during his freshman campaign.

Career Lists Part Two: Jon Gulbransen also continues to climb the career strikeouts list at Valpo.  The southpaw has fanned 219 hitters during his career,  passing Richard Beumer (1959-1962) for sixth on the career charts.  The southpaw is just three strikeouts behind Tom Starck (2001-2004) for a spot in the top-five.