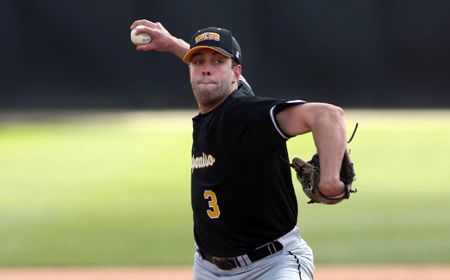 Valparaiso got a pair of complete game efforts on Saturday afternoon as the Crusaders swept a doubleheader, and the weekend series from Cleveland State at All Pro Freight Stadium in Avon, Ohio.  The Crusaders won the opener 12-2 and took the night cap 6-1.

“It was a great weekend for us,” head coach Tracy Woodson said.  “Our pitching was outstanding.  They threw strikes, got outs, and didn’t extend themselves with a lot of pitches.  To come out on here and win three on the road is huge.”

The Crusaders added to the lead in the second.  Andrew Bain (Indianapolis, Ind./Park Tudor H.S.) led off with a single and moved up on an error by the third baseman as Gaedele reached.  Steven Scoby (Delton, Mich./Delton Kellogg H.S.) loaded the bases with a bunt single and Bain scored on a walk to Manning.  Cleveland State starter Travis Miller was relieved by Brandon Cooper, who promptly walked Hagel to force home another run.  Ryan O’Gara (Buffalo Grove, Ill./Buffalo Grove H.S.) hit a sacrifice fly to right, which was dropped, but brought home Scoby with the game’s fifth run.  A double play ball then plated Manning and Valpo took a 6-0 lead.

Cleveland State found the scoreboard in the bottom of the fourth.  Alex Johnson led off the inning his first home run of the season, a shot to deep left.

Valpo continued to pile on runs in the sixth.  Bain led off with a double and Gaedele followed with a run-scoring single.  Scoby reached on a fielder’s choice, and moved up on an error as the throw to get Gaedele went wide at second, putting runners on second and third.  Manning delivered a two RBI single to left and scored himself on a towering two-run home run by Hagel, his first round-tripper of the season, putting the Crusaders on top 11-1.

The Vikings answered with a single run in the bottom of the sixth as Dylan Schwegler led off with a double and eventually scored on a pinch hit sacrifice fly by Mike Norkus.

The Crusaders continued to add to the lead in the ninth.  O’Gara led off with a walk and Thibault was hit by a pitch.  Michael Morman (Rockford, Ill./Boylan Catholic H.S.) delivered a run-scoring single down the line to plate O’Gara, giving Valpo the 12-2 lead.

“Our bats were much better today,” Woodson added.  “We extended the lead a couple of times which is what we need to do.”

McCormick was masterful on the hill, pitching a complete game victory (2-5).  He scattered just three hits and walked two while striking out six.  It was his second complete game effort of the season.  Miller took the loss (0-6), allowing six runs, four of which were earned, and six hits in one inning plus of work.  He also walked two.

Manning finished the game with two hits and four runs batted in while Hagel also had a two-hit game and three runs batted in.  Bain and Gaedele each had two hits as well, with Gaedele and Manning scoring three times in the opener.

In game two Valpo again found the scoreboard in the opening inning.  Gaedele led off with a walk, took second on a wild pitch, moved to third on a ground out, and scored on a ground out by Manning.

Starting pitcher Tyler Deetjen (Saint Charles, Ill./East H.S.) kept the Vikings at bay until Valpo could add some insurance runs.  The junior southpaw allowed a lead off single in the first and did not allow another hit until a two-out single in the fifth.  He retired 10 in a row at one point from the third to the fifth.

The Crusaders added a pair of runs in the sixth.  Scoby walked to lead off the inning and Manning followed with a single.  Hagel drove home Scoby with a single into left.  With two outs, Martin added to the advantage with a single through the left side, plating Manning and giving Valpo a 3-0 advantage.

Cleveland State finally scored in the sixth.  John Calhoun singled with one out and stole second.  One batter later, Tyler Wynn doubled into the left field corner for an RBI, cutting the Crusader lead to two.

Valpo added three insurance runs in the ninth, all with two outs.  Morman walked and Bain was hit to put two men aboard.  Gaedele drove home Morman with a double down the leftfield line.  A batter later, Scoby singled to left, plating Bain and Gaedele, and putting the Crusaders on top 6-1.

“Those three runs in the ninth were huge,” Woodson concluded.  “It took the pressure off of Deetjen.”

Deetjen controlled the Vikings on the mound, going the distance for the third time this season.  He scattered just five hits and allowed only the one run.  He walked just two and struck out five for the win (3-5).

Cody Bates took the loss (0-4) for Cleveland State (6-2, 0-9 Horizon).  He went six innings allowing three runs and six hits while walking three.  He did not strike out any Crusaders.

Gaedele and Hagel each had two hits in the night cap for the Crusaders as part of an eight-hit attack.  Scoby had a pair of runs batted in.