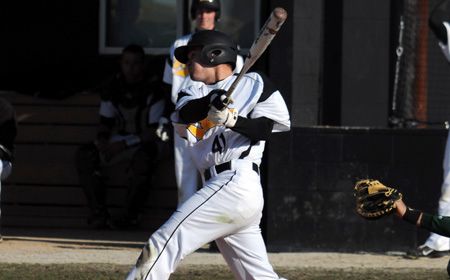 The nine straight wins are tied with Stetson and Oregon State for the longest active streak in NCAA Division I baseball.

“We’re excited about our winning streak and the way we are playing,” head coach Tracy Woodson said.  “We’ll look to extend it again tomorrow.  We are winning games in different ways each day.”

All 11 runs in the game were unearned, as the Crusaders also committed four miscues in the game, leading to Saint Francis’ runs.

The Cougars took advantage of a pair of Valpo errors in the second inning to take the early lead.  With two outs, back-to-back throwing errors by the Crusaders plated three Saint Francis runs, giving the visitors the early lead.

Valpo answered in the bottom of the second as Michael Morman (Rockford, Ill./Boylan Catholic H.S.) reached when the Cougar centerfielder dropped a fly ball, allowing Ryan O’Gara (Buffalo Grove, Ill./Buffalo Grove H.S.), who singled, to score.  Morman scored later in the inning on a RBI single by Sam Carius (Naperville, Ill./Waubonsie Valley H.S.), For Carius, it was his first collegiate hit and run batted in in his first collegiate start.

The Crusaders tied the game in the fourth on a double play ball that scored Andrew Bain (Indianapolis, Ind./Park Tudor H.S.), who had reached on an error.

Kevin Upp (LaPorte, Ind./LaPorte H.S.) allowed just two Saint Francis hits in seven innings of work, including just one after that second inning, and earned the win (2-0) when Valpo scored five times in the bottom of the seventh.  Upp struck out three while allowing just the three unearned runs.

“Upp did a nice job for us today,” Woodson added.  “He gave up the unearned runs early and then really settled in.”

Owen suffered the loss (0-5) for Saint Francis (14-30), allowing eight runs, none of which were earned.  He allowed nine hits in seven innings.

Robinson, Olejniczak, and Carius each had two hits for the Brown and Gold in the win.

Valparaiso (15-21) takes to the road on Tuesday afternoon, heading to Fort Wayne, Ind. to face IPFW.  First pitch is slated for 2 p.m. CDT.