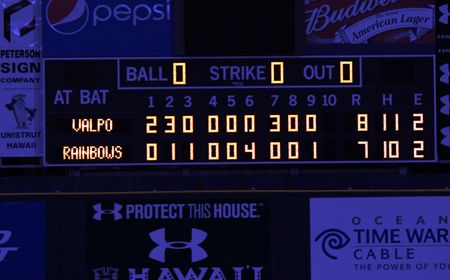 The Crusaders have now matched the second longest winning streak in school history as well, trailing just the 12-game streak set by the 1958 squad.  Valpo has also win five straight on the road, tied for third longest active streak in the country.

While most fans were long asleep back in the Midwest, Jon Gulbransen (Appleton, Wis./Fox Valley Lutheran H.S.) threw  3.2 innings of relief, striking out seven to earn the win (4-5) against the Rainbows, who are in first place in the Western Athletic Conference and advanced to the NCAA regionals one season ago.

“This has to be one of our biggest wins in school history,” head coach Tracy Woodson said after the game.  “To come more than 4,000 miles over five time zones and beat the WAC’s best shows what our guys are capable of doing.”

The Crusaders wasted little time jumping on the scoreboard in front of a paid crowd of 2,703 fans, 1,415 of which came through the turnstiles on Thursday night.  Gaedele led off the game with a single up the middle and moved to third on a double by Steven Scoby (Delton, Mich./Delton Kellogg H.S.).  Will Hagel (Arlington Heights, Ill./Prospect H.S.) plated Gaedele on a RBI ground out before Robbie Robinson (Brea, Calif./Olinda H.S.) singled home Scoby and stake starting pitcher Justin Frane (Huntertown, Ind./Carroll H.S.) to a 2-0 lead before he even took the mound.

Corey Thibault (Tustin, Calif./Foothill H.S.) led of the second with a bunt single and Michael Morman (Rockford, Ill./Boylan Catholic H.S.) reached on an error.  With one out, Gaedele hit a blast over the 365 sign in left-centerfield for a three-run homer, increasing the Crusader advantage to 5-0.

“Gaedele hit a bullet,” Woodson said.  “This was the hardest we’ve hit the ball for an entire game as a team this season.”

Hawai’i got one run back in the second on three straight singles, including a RBI hit by Breland Almadova, and added a second run on a passed ball in the third.

Valpo took the 5-2 lead into the sixth, as Frane struck out five Rainbows in his 5.1 innings of work, but finished with a no decision.  He allowed just one earned  run and seven hits while striking out five.

In the sixth however, a pair of Crusader errors put two men aboard and Sean Montplaisir tripled into the rightfield corner to pull Hawai’i within a run.  After a walk put runners on the corners, Almadova tied the game with a squeeze bunt to plate Montplaisir.  Kolten Wong put the Rainbows on top 6-5 with a single into right-center.

The Crusaders fought right back in the top of the seventh.  Hagel led off with a single but was forced at second on a grounder by Robinson.  Bobby Martin (Crystal Lake, Ill./Prairie Ridge H.S.) singled Robinson around to third, and he scored on a Thibault sacrifice fly to tie the game with two outs.  Morman followed reaching on another Rainbow error, before Andrew Bain (Indianapolis, Ind./Park Tudor H.S.) put Valpo on top with a two run double to center.

“When they took the lead we came right back and got those runs back,” Woodson added.  “That was huge.  Bain had a big hit.  He battles and battles and just puts the ball in play.”

Gulbransen, who relieved Frane with one out in the sixth, struck out the side in the seventh after Valpo took the 8-6 lead, and set the side down in order again in the eighth.

The Brown and Gold loaded the bases in the ninth trying to add some insurance runs, but were unable to do so, and took the two-run advantage into the bottom of the ninth.

Pi’ikea Kitamura drew a lead off walk for the Rainbows and Wong, who went 4-for-4 on the day with a walk, doubled off the rightfield wall, putting runners on second and third.  Gulbransen struck out Jeffrey VanDoornum for the first out of the inning but Zack Swasey followed by doubling over Gaedele’s head off the wall.  Kitamura scored and Wong tried to as well, but Gaedele’s relay throw to Hagel to Thibault gunned him down for the second out of the inning.  Swasey moved up to third.  Gulbransen saved his seventh strikeout for the final out of the game, fanning Michael Blake to give the Crusaders the one-run victory.

“Gaedele came up with the ball and hit the cutoff man,” Woodson said.  “That’s huge because that’s what wins or loses ball games and tonight it won it for us.”

Gaedele finished 3-for-5 for the Crusaders with three runs batted in while Scoby, Martin and Bain each had two hits.  The Crusaders finished the night with 11 hits.

Alex Capaul, the third of six Hawai’i pitchers used in the game, suffered the loss (1-2), allowing two runs and three hits in one inning of work.  The Rainbows finished with 10 hits offensively, including two-hit nights by Swasey and Montplaisir in addition to Wong’s four.