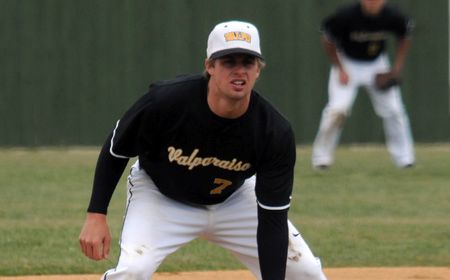 Valparaiso returned to first place in the Horizon League on Sunday afternoon as the Crusaders won both games of a doubleheader against Cleveland State at Emory G. Bauer Field to complete a five-game season sweep of the Vikings.  The Crusaders won the opener 5-1 before taking the nightcap 2-1.

“Playing at home it was important for us to come out and take care of business today,” head coach Tracy Woodson said.  “We got the job done and picked up two important wins.”

The Crusaders jumped on top in the opening inning of game one to set the tone in the seven-inning contest.  Kyle Gaedele  (Arlington Heights, Ill./Rolling Meadows H.S.) reached on an error to lead off the game and promptly stole second. With one out, Chris Manning (Lake Forest, Calif./El Toro H.S.) delivered a single into left-center to put the Brown and Gold on the scoreboard.

In the second Michael Morman (Rockford, Ill./Boylan Catholic H.S.) added to the lead with his first home run as a Crusader, a two-run blast to leftfield.

“That homer was big because it gave us a lead of more than one run,” Woodson said.  “You always like to have a little cushion.”

Valpo continued to add to its lead in the fifth.  Gaedele led off with a double and moved to third on a wild pitch as Steven Scoby (Delton, Mich./Delton Kellogg H.S.) walked.  Manning delivered a sacrifice fly to plate Gaedele with the game’s fourth run.  After a walk moved Scoby to second, Ryan O’Gara (Buffalo Grove, Ill./Buffalo Grove H.S.) came through with a two-out single to increase the lead to 5-0.

Starter Jon Gulbransen (Appleton, Wis./Fox Valley Lutheran H.S.) cruised through the first five innings on the hill, allowing just two hits.  He ran into his only speed bump in the sixth, allowing a lead-off single to John Calhoun.  After a wild pitch advanced him 90 feet, Alex Johnson put the Vikings on the scoreboard with a double to right-center.  Two walks later the bases were loaded with the tying run at the plate, but Gulbransen induced a pop up from Matt Kirkwood to retire the side.

Gulbransen finished the complete game allowing just one base runner in the seventh to earn the win (5-5).  He allowed just four hits while walking four and striking out seven.  The senior passed Bryce Shafer (2008-2010) for fourth on Valpo’s career strikeout list, as he has increased his total to 252, just one shy of third all-time.

O’Gara and Will Hagel (Arlington Heights, Ill./Prospect H.S.) each had two hits as part of an eight-hit attack by the Crusaders, all off of starter Nate Blankemeyer who suffered the loss (0-3), allowing the five runs, four of which were earned, in 4.2 innings of work.

In the night cap it was Cleveland State that struck first.  Jason Haditsch singled with one out in the third inning and moved to third on a double by Calhoun.  Anthony Sambula delivered a sacrifice fly, giving the Vikings a 1-0 lead.

Viking starter Nate Dick allowed just three Valpo hits through the first five innings, keeping the Crusaders off of the scoreboard.  In the sixth, the Brown and Gold finally broke through.  Gaedele led off with a single and Scoby beat out a bunt to put two men aboard.  Manning moved both runners up with a sacrifice bunt before Hagel tied the game at one with a one-out single through the drawn in infield.  With two outs, Bobby Martin (Crystal Lake, Ill./Prairie Ridge H.S.) put Valpo on top with a single to right-center, scoring Scoby.

“We had a bit of a letdown to start game two,” Woodson said.  “Their kid was pitching well, but we managed to scratch out the two runs with a bit of small ball.”

Those would be the only two runs Tyler Deetjen (Saint Charles, Ill./East H.S.) would need.  He went the distance for the fourth time this season, scattering just seven hits, including just two singles over the final five innings to earn the win (4-6).  He threw just 88 pitches over the nine innings, striking out five while not walking any Vikings.

“Deetjen continued to get stronger as the game went along,” Woodson added.  “We made some big plays defensively to back both of our starters today.”

Martin went three-for-four in game two to pace the Crusaders eight-hit effort in the night cap.

Valparaiso (20-23, 12-4) moved back into first place in the Horizon League by one-half game over Wright State as the Raiders split a twinbill at Butler on Sunday.  The Crusaders and Raiders will play a big three-game series in Dayton, Ohio next Saturday and Sunday with the top spot in the conference on the line.

The Crusaders will return to the diamond on Tuesday afternoon heading to DeKalb, Ill. for a non-conference tilt with Northern Illinois.  First pitch is set for 3 p.m.