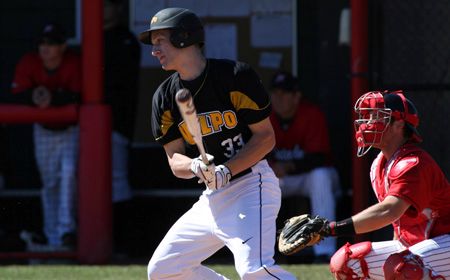 Northern Illinois scored once in the eighth and three times in the ninth inning on Tuesday afternoon to come from behind and defeat Valparaiso 7-6 at Ralph McKinzie Field in DeKalb, Ill.

“I’m disappointed we didn’t win the game, especially after we built the lead,” head coach Tracy Woodson said.  “We gave away a couple of outs that came back to cost us and had two opportunities with a runner on third and less that two outs that we didn’t score.  It was the little things that came back to bite us.”

Northern Illinois (21-21) jumped out to a 1-0 lead in the opening inning on a triple by Alex Jones, scoring Alex Beckman, who walked with one out.

The Huskies answered with a run in the third on a two-out single by Troy White before Valpo added two more runs in the fourth.  Will Hagel (Arlington Heights, Ill./Prospect H.S.) led off with a walk and moved up 90 feet on a balk.  Robbie Robinson (Brea, Calif./Olinda H.S.) reached on an error, scoring Hagel.  With two outs, Andrew Bain (Indianapolis, Ind./Park Tudor H.S.) delivered a run-scoring single to make it 5-1 Crusaders, but the Brown and Gold ended up leaving the bases loaded in the inning without scoring another run.

A Valpo error and a double by Joe Etcheverrey pulled the Huskies within two in the fifth before Valpo added another run in the seventh.  Chris Manning (Lake Forest, Calif./El Toro H.S.) led off with a triple and scored one batter later on an error.

Leading 6-3 heading into the eighth, Northern Illinois drew a two-out walk before Zimmerman doubled to center, making it a 6-4 game.

In the ninth, two singles and a walk loaded the bases before a hit batsman plated the first run of the inning.  A bases loaded balk tied the game when the ball slipped out of Kevin Wild’s (Brown Deer, Wis./Brown Deer H.S.) hand in the rainy conditions.  After an intentional walk reloaded the bases, Zimmerman delivered the game-winning hit with two outs.

Wild suffered the loss (1-1), working 3.1 innings of relief, the first three of which he allowed just two hits.  Ben Etcheverrey earned the win (3-1) as the sixth and final pitcher of the day used by the Huskies.

Martin finished the game 2-for-3 with two walks and two runs scored for the Crusaders while Morman and Bain each had two hits as well.  Wells led Northern Illinois with three hits.

Valparaiso (20-24) returns to the diamond this weekend for a big three-game weekend series against Wright State as the top two teams in the Horizon League battle in Dayton, Ohio.  Saturday’s doubleheader begins at 12 p.m. CDT.