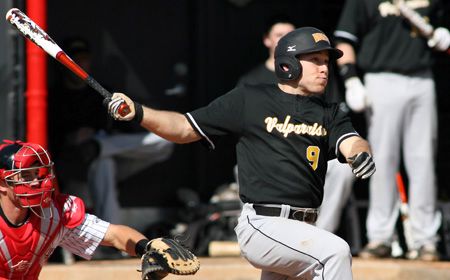 A two-out single in the bottom of the ninth inning lifted Wright State to a 6-5 come-from-behind victory over Valparaiso on Sunday afternoon at Nischwitz Stadium in Dayton, Ohio.

The Crusaders built a 5-0 lead through three-and-a-half innings, only to see the Raiders battle back, taking advantage of four Valpo errors.  Wright State now moves one-half game ahead of Valparaiso in the Horizon League standings heading into the final two weekends of the regular season.

“I was disappointed with our defense today,” head coach Tracy Woodson said.  “(Tyler) Deetjen earned a win, but we didn’t play defense behind him.  We scored five runs and gave back three of them.”

Valpo jumped on top with two outs in the third inning.  Chris Manning (Lake Forest, Calif./El Toro H.S.) singled and stole second before scoring on a RBI single off of the bat of Will Hagel (Arlington Heights, Ill./Prospect H.S.).

The Crusaders added to the lead in the fourth, knocking Wright State starter Max Friedman out of the game early.  Bobby Martin (Crystal Lake, Ill./Prairie Ridge H.S.) led off with a single and Corey Thibault (Tustin, Calif./Foothill H.S.) followed with a walk.  After a sacrifice bunt, Andrew Bain (Indianapolis, Ind./Park Tudor H.S.) singled home Martin, but Thibault had to hold at second on the infield hit.

Kyle Gaedele (Arlington Heights, Ill./Rolling Meadows H.S.) loaded the bases with a single to center that was lost in the sun and dropped in for a hit.  Steven Scoby (Delton, Mich./Delton Kellogg H.S.) delivered a two-run single into left-center, marking the end  of the day for Friedman.  Manning added a single to load the bases, and a Hagel sacrifice fly gave Valpo a 5-0 lead.

Wright State got a run back in the bottom of the fourth as Tristan Moore scored on a two out error, after moving to third following a double and a throwing error.  The Raiders continued to cut into the lead in the fifth on a triple by Zack Tanner and a double by Dan Marsh.  Moore then reached on a two-out throwing error, scoring Marsh, pulling the hosts within 5-3.

In the sixth, Ryan Ashe singled and stole second, scoring on a two-out hit by Andrew Elliott, making it a one-run game.

Raider reliever Michael Meintel allowed just two hits in 3.2 innings of relief, keeping the Crusaders from adding on to the lead.  Valpo put runners on third in both the seventh and eighth innings though, but could not plate them.

“We had opportunities to build on the lead and couldn’t do it,” Woodson added.  “We got the guys on base we needed to, and moved them over, but couldn’t score them.”

With a one-run lead in the ninth, Jake Hibberd tied the game with a one-out home run to leftfield.  Moore followed with a double, and after moving up 90 feet on a fly out, scoring on a two-out single back up the middle by Kyle Mossbarger.

Michael Schum earned the win (8-2) in relief for Wright State (30-14, 13-5 Horizon), tossing the final two innings.  Kevin Wild (Brown Deer, Wis./Brown Deer H.S.) suffered the loss (1-2) for the Crusaders, allowing the final two runs.  Tyler Deetjen (Saint Charles, Ill./East H.S.) started and went 7.2 innings for Valpo, allowing four runs, only two of  which were earned, and nine hits.  He did not walk anyone.

Manning and Hagel each had two hits to pace Valpo’s 10-hit attack, while Moore and Tanner each had three hits for the Raiders, as Wright State tallied 12 hits for the game.

“We showed we had the chance to win the series from the preseason favorites in the league,” Woodson said.  “We’ll see them again in the tournament in a couple of weeks and can’t make mistakes.  In the two games we lost we had four errors each.”

Valparaiso (21-26, 13-6) will return home to Emory G. Bauer Field next Saturday afternoon as the Crusaders host Milwaukee in a Horizon League doubleheader.  First pitch is set for noon with Senior Day activities beginning at approximately 11:45 a.m.