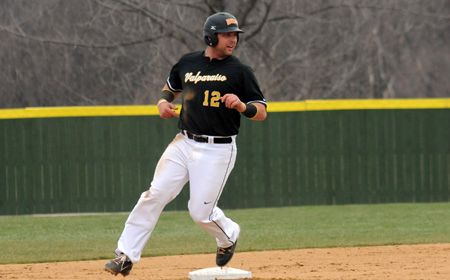 Valparaiso came from behind twice to tie the game, including once in the ninth inning on Thursday afternoon, but Milwaukee plated the game-winning run in the bottom of the 10th to defeat the Crusaders 4-3 at Henry Aaron Field in Milwaukee, Wis.

Damon McCormick (Louisville, Ky./Saint Xavier H.S.) went the distance for Valpo suffering the loss (5-6).  He pitched well, but gave up the game-winning single to Sam Sivilotti with one out in the 10th inning.  McCormick allowed the four runs on 10 hits and struck out four while walking just two.

“It’s extremely frustrating losing today,” head coach Tracy Woodson said.  “I thought for the most part we played a good ball game.  Damon pitched well and we didn’t commit any errors defensively, which have cost us games in the past.  However, we didn’t get down a few key bunts nor did we score a couple of runners from third, and that’s the difference.”

Valpo struck first in the second inning.  Robbie Robinson (Brea, Calif./Olinda H.S.) doubled to the gap in left-center with one out and ended up on third when the leftfielder had trouble picking up the ball along the wall.  Robinson scored one batter later on a wild pitch, giving the Crusaders a 1-0 lead.

Milwaukee answered in the bottom of the second.  With two outs Paul Striggow tripled to deep center, just out of the reach of a diving Chris Manning (Lake Forest, Calif./El Toro H.S.), plating a pair of runs and giving the Panthers a 2-1 lead.

Both McCormick and Milwaukee starter Chad Pierce prevented any more runs from going up on the scoreboard from the third through sixth innings before the Crusaders tied the game in the seventh.  Robinson led off the inning with his third home run of the season, a blast to deep leftfield.

Again Milwaukee retook the lead in the bottom of the frame.  Mark Strey led off with a single and moved to second on a sacrifice bunt.  With two outs, Cole Kraft singled up the middle, giving the hosts a 3-2 advantage, which they would take to the ninth inning.

Robinson led off the ninth with his third hit of the day, a single up the middle, and David Klein (Aurora, Ill./Oswego East H.S.) pinch ran for him.  Robinson finished the day just a triple from the cycle.

“Robbie swung the bat well today,” Woodson said.  “This was probably the best he has swung for an entire game all season.”

Bobby Martin (Crystal Lake, Ill./Prairie Ridge H.S.) sacrificed Klein to second and Corey Thibault (Tustin, Calif./Foothill H.S.) delivered a game-tying double to the gap in left-center.  He was stranded at third though, as Valpo was unable to push the go-ahead run across the plate.

“We executed that inning to get the tying run home,” Woodson said.  “Robinson got on to lead off, we pinch ran for him, Martin got the bunt down, and Thibault delivered the big hit.”

The Crusaders threatened in the top of the 10th, putting the first two runners on, but a strikeout-caught stealing double play helped prevent Valpo from scoring.

Robinson led Valpo’s 11-hit attack with his 3-for-4 afternoon wile Martin had a pair of doubles in three at bats and also had the sacrifice bunt.

Kraft and Sivilotti each had two hits for Milwaukee as the Panthers tallied 10 on the afternoon.

Pierce went nine innings, allowing three runs and 10 hits, striking out six and did not walk anyone, but earned a no decision for Milwaukee.  Cuyler Franzke earned the win (1-1) in relief, pitching the 10th inning.