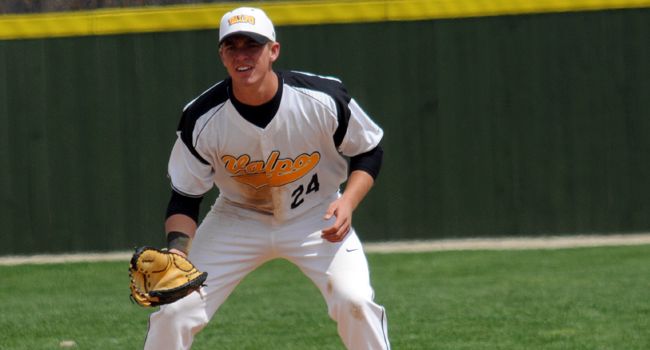 Valparaiso University had six players earn recognition by the Horizon League for their efforts on the baseball diamond in 2011 as the conference announced its year end awards on Tuesday.

Hagel led the Crusaders in batting during the regular season with a .316 average and a team-leading 41 runs batted in.  He ranks fourth in the conference in RBIs and is tied for third with three triples.  The redshirt-junior hit .367 with 26 RBIs during conference action, and enters the Horizon League Tournament with a streak of 25 consecutive games reaching base.

Gaedele ranks among the top-10 in the Horizon League in nine different categories.  A .316 hitter on the season, he led Valpo with seven home runs, 14 doubles, and 49 hits.  He drove in 36 runs and shares the conference lead with 21 stolen bases.  A junior outfielder, Gaedele is now a two-time Second Team All-Horizon League selection.

Robinson, an All-Newcomer Team selection one year ago, batted .288 for the Brown and Gold in 2011 with 26 runs batted in.  He finished second on the team in conference play with a .346 mark.  The senior split time between catcher and designated hitter this season, and earned the All-League selection as a utility player.

Upp appeared in 10 games for the Crusaders, making three starts on the mound.  He finished the regular season with a 2-0 record with a 3.00 ERA in 30 innings of work.  Opponents hit just .222 against the freshman, the second best mark in the conference.

Martin’s bat heated up as the season went along, and he enters the Horizon League Tournament with a 14-game hitting streak.  The Crusader junior infielder batted .269 with 18 runs batted in on the year, and posted a .345 on base percentage.  In conference action, Martin upped his average to .333, third best on the squad.

Manning hit .271 in his freshman campaign, starting all 52 games in centerfield for Valpo.  He is tied for second in the Horizon League with four triples and shares the league lead with 21 stolen bases.  Manning batted .300 in conference action with a .390 on base percentage.

Valparaiso (22-30, 14-10 Horizon) will open the Horizon League Tournament on Wednesday morning against Butler.  First pitch is slated for 10 a.m. CDT from Nischwitz Stadium in Dayton, Ohio.