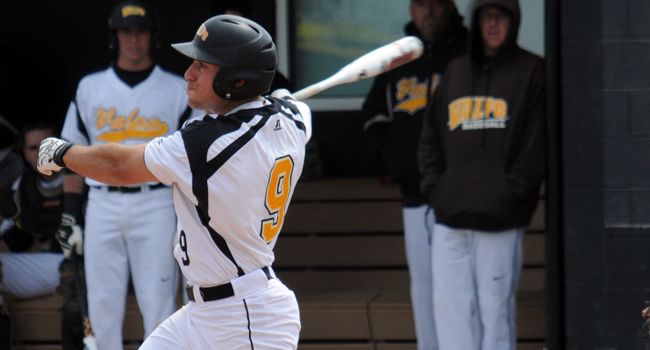 Valpo pounded out 18 singles, with every Crusader recording at least one hit as the Brown and Gold posting its highest hit total of the 2011 season.

“Hitting is contagious,” head coach Tracy Woodson said.  “We had even more opportunities early in the game where we didn’t plate some runs, but we’ve hit the ball well the last two games.  We need to keep it going throughout the rest of the  week.”

McCormick earned his sixth win (6-6), scattered seven hits in his fifth complete game of the season, striking out three while walking just one.

“Damon was great for us today,” Woodson added.  “He’s a senior and we really wanted him to get the complete game shutout.  He got us started for the tournament on the right note.”

The Crusader offense was jump-started in the second inning as Valpo scored a pair of times.  Robbie Robinson (Brea, Calif./Olinda H.S.) led off with a single.  After back-to-back walks to Bobby Martin (Crystal Lake, Ill./Prairie Ridge H.S.) and Ryan O’Gara (Buffalo Grove, Ill./Buffalo Grove H.S.) loaded the bases, Scoby plated two runs with a single through the right side.

Valpo added to its lead in the third as Chris Manning (Lake Forest, Ill./El Toro H.S.) led off with a bunt single, moved to second on a wild pitch, and scored on a RBI single off of the bat of Kyle Gaedele (Arlington Heights, Ill./Rolling Meadows H.S.).

A six-run fifth inning broke the game wide open.  A fielder’s choice off of the bat of Martin scored the first run and Scoby added a two-run triple to left, chasing Butler starter Dom Silvestri.  Michael Morman (Rockford, Ill./Boylan Catholic H.S.) added a run-scoring single after greeting reliever Joel Leichty and scored two batters later following a Bulldog throwing error.  Will Hagel (Arlington Heights, Ill./Prospect H.S.) made it 9-0 Valpo with his single, extending his on base streak to 26 straight games.

“That six-run inning was huge,” Woodson said.  “We kept putting pressure on them the entire game and finally broke through big.”

It was all McCormick from there, as he allowed just one runner to reach base, Andrew Eckhardt, the game’s lead off man, who doubled and moved over with two outs.  He put two runners on in an inning just twice.

Manning went 4-for-5 with a pair of runs scored while Robinson and Andrew Bain (Indianapolis, Ind./Park Tudor H.S.) each had three-hit days.  Martin extended his hitting streak to 15 with his hit in the third inning and Scoby drove home four of the nine runs.

Silvestri suffered the loss (6-5) for Butler (23-27-1), working 4.1 innings.  He allowed 12 hits and seven runs, walking two and striking out one.   Grant Fillipitch and Corey Moylan each had two hits for the Bulldogs.

“Winning the first game in a tournament like this is a must,” Woodson concluded.  “If you get in the loser’s bracket early you end up running out of pitching.  Now we have to take everything day by day, starting again tomorrow.”

Valparaiso (23-30), the tournament’s fourth seed, will advance in the winner’s bracket to face second-seeded UIC at 2:05 p.m. CDT on Thursday.  Butler falls the loser's bracket and will face Milwaukee on Thursday.  The Panthers fell 4-2 to Youngstown State in Wednesday's other game.