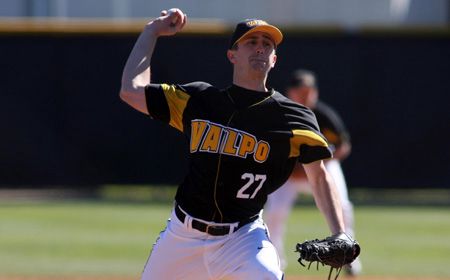 Justin Frane earned the victory in relief for the Crusaders. (Jeff Golden)
Valparaiso at UIC | May 27, 2011
Related Links
Related Links

Valparaiso advanced to the finals of the Horizon League Tournament’s winner’s bracket on Friday afternoon with a thrilling come-from-behind 11-9 victory over UIC at Nischwitz Stadium in Dayton, Ohio.

“We kept our composure and battled back twice,” head coach Tracy Woodson said.  “Martin’s been big the last three weeks for us.  He’s driving in the runs, and a lot are coming with two outs.”

Every Crusader had at least one hit for the second straight game, as Valpo pounded out 18 hits, giving the Brown and Gold 37 total in the first two games of the tournament.  The Crusaders have 55 hits dating back to the regular season finale, as the bats have come alive at the right time.

Martin’s single scored Andrew Bain (Indianapolis, Ind./Park Tudor H.S.) and Chris Manning (Lake Forest, Calif./El Toro H.S.), as the duo led off with a single and a walk respectively to start the eighth.

Steven Scoby (Delton, Mich./Delton Kellogg H.S.) scored an insurance run in the ninth after leading off with a single.  He scored two batters later on a Bain hit.

Justin Frane (Huntertown, Ind./Carroll H.S.), who came out of the bullpen in the seventh inning to pitch for the first time since April 30, struck out the side in the ninth, facing UIC’s three, four, and five hitters.  Frane earned the win (3-2) with 2.1 innings of scoreless baseball, striking out four and allowing just one hit among the eight batters he faced.

“Frane might have had one of the gutsiest performances I have ever seen,” Woodson stated.  “We didn’t know what to expect with his injury.  He hadn’t pitched in awhile and he was just great.  He lifted everyone up.  The dugout really got behind him in the ninth.  Everyone was up on the top step.”

UIC plated a run in the second on a double play ground out before Valpo added to the lead in the third.  Manning scored on a throwing error and Gaedele crossed the plate on a double by Martin.  After Ryan O’Gara (Buffalo Grove, Ill./Buffalo Grove H.S.) plated  Robinson with a ground out the Crusaders held a 5-1 lead.

Alex De LaRosa tripled to score one run for the Flames in the third and later scored on a single by Jason Ganek.  UIC took the lead in the fourth, scoring four times.  Steve McGuiggan had a triple while De LaRosa and Ganek followed with a double and single respectively.

“It was an up and down game throughout,” Woodson added.  “We never quit and just kept battling.”

Hagel put Valpo on top in the sixth with a RBI single, plating Manning, who had doubled, chasing UIC starting pitcher Joey Begel.  Begel went 5.1 innings allowing eight runs, four of which were earned, and 12 hits.

Ganek, who had four RBIs for the Flames, gave UIC the 9-8 lead with a two-run home run in the bottom of the seventh, setting the stage for Valpo’s dramatic rally.

Tyler Deetjen (Saint Charles, Ill./East H.S.) started and worked 6.2 innings for the Crusaders before yielding to Frane.  The junior allowed 14 hits and nine runs, but did not walk anyone in the no decision.

Manning finished four-for-five with three runs scored while Bain and Hagel each had three-hit days.  De LaRosa also had three hits for UIC (27-25) in addition to Ganek, as the Flames finished the afternoon with 15 hits.

“It’s all about what you do at tourney time in this league,” Woodson concluded.  “It’s exciting.  We’ve never been to the finals of the winner’s bracket before.  We have something special going and we hope to continue it tomorrow.”