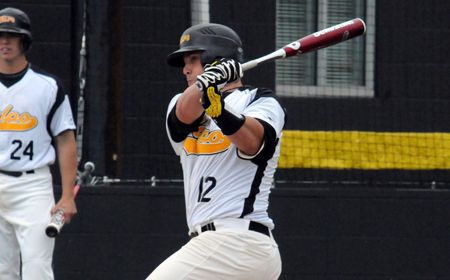 Robbie Robinson led the North to a win over the South in the Northwoods League All-Star game. (Ray Acevedo)

Robinson started the game catching for the North Division as his team won 7-5.  Robinson finished the game 1-for-1 with two walks.  Gaedele led the South Division at the plate as the designated hitter, going 3-for-4 with a run scored and an RBI.  He also stole a base.  Earlier in the evening, Gaedele hit a total of six home runs to advance to the final round in the 2010 Northwoods League Home Run Derby.  However, Gaedele fell one homer short in the finals against Duluth’s Mark Threlkeld (Louisiana Tech) to finish runner-up.

In other action, Jon Gulbransen (Appleton, Wis./Fox Valley Lutheran H.S.) continues to impress in the Great Lakes Collegiate League as he threw four scoreless innings on July 20 for the Licking County Settlers.  The Settlers currently sit at 21-8 on the season and are ranked 12th nationally in the top summer collegiate teams by Perfect Game.  Gulbransen is 3-1 with a 2.84 ERA.