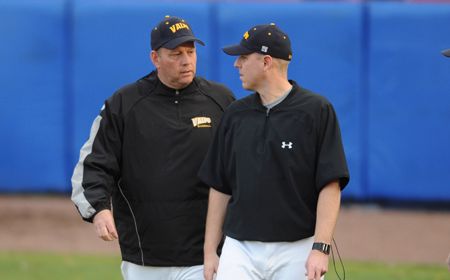 “There is no doubt from top to bottom this is the best recruiting class we have brought in here at Valpo,” said Woodson.  “We have been able to bring in players who will increase our overall team speed and athleticism, as well as several quality arms.  For the 2010-2011 season we will have a nice mix of veteran players along with our incoming recruits.  We are really excited to see this recruiting class get on campus this fall and begin to get settled in at Valpo.”

Bobby Martin, a native of Crystal Lake, Ill., is a 6’1”, 190-pound, middle infielder who comes to Valparaiso from Heartland Community College in Illinois.  Martin will have two seasons of eligibility remaining. Last year at Heartland CC, where despite battling a hamstring injury most of the season, he finished strong with a .395 batting average, 14 doubles, four homeruns, and 20 RBIs in only 81 at bats.

“Recruiting a shortstop was our top priority for the 2010 recruiting class and we feel like we have found the best fit for us here at Valparaiso,” Woodson said.  “We are counting on Bobby to make an immediate impact not only at the top of our line-up but also as our leader in the infield.  He gives us above-average speed, a power bat, as well as being a plus defender.”

Chris Manning, from Lake Forest, Calif., is an outfielder with a 6'0'', 185-pound frame who graduated from El ToroHigh School.  Manning finished the 2010 season with a .375 batting average and a .682 slugging percentage.  The Second Team All-CIF Southern Section baseball selection had 26 RBIs, four triples, seven homeruns, and 21 stolen bases.

“Chris is a huge sign for us as he is a speedy outfielder that can swing the bat for power and average,” added Woodson.  “He is from California and has played with and against the best high school competition in the country.”

Kevin Wild, a Brown Deer, Wis. native, is a 6’2”, 190-pound right-handed pitcher/utility player, who is transferring from Madison College (MATC) in Wisconsin.  Wild was a key contributor for MATC as the team advanced to the 2010 NJCAA Division II National Tournament in Enid, Oklahoma after winning the Region IV Junior College Championship.  In that championship game, Wild threw a nine-inning complete game giving up only four earned runs while striking out four.  Due to splitting duties as both a pitcher and a position player, Wild saw limited action on the mound.  During the 2010 season, Wild pitched 32.1 innings, striking out 26 and only walking 10 batters.

“Kevin will be a great addition to our pitching staff,” Woodson concluded.  “We are very excited to start working with him as we feel he has not even scratched the surface of his pitching potential.  He has a live arm with great movement.”