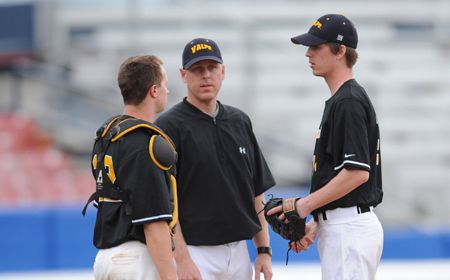 The past two seasons Piotrowicz coached at Heidelberg University, where he was the hitting and catching coach.  In addition, his primary duties included recruiting and designing a strength and agility program.   The Heidelberg baseball program finished fourth at the 2010 NCAA DIII World Series and in the past two years has won the Ohio Athletic Conference regular season and conference tournament titles.  Additionally, Heidelberg was a participant in the NCAA DIII Mideast Regional in 2009 and 2010.  Under Piotrowicz guidance, Heidelberg’s offense set nine school records and led the conference in numerous offensive categories.  In addition, five of Heidelberg’s position players received DIII All-American honors.

In 2010 Piotrowicz was the head coach for the Ty Cobb Reds in the Great South Summer Collegiate League, guiding the team to a third place finish.

As a player, Piotrowiczi was a standout at Manchester College from 2005-2008.  As a senior in 2008, he was elected team captain and helped lead his team to a NCAA DIII Mideast Regional and Heartland Collegiate Athletic Conference championship.  He graduated from Manchester College in 2008 with a Bachelor of Science degree in business and earned a Masters degree in Education from Heidelberg University in 2010.

"Coach Piotrowicz joins our staff from the highly successful Heidelberg University program,” said Woodson. “He has been successful in his years as a college player and coach and we have no doubt that mentality will carry over to our program.  He will be working with all of our hitters as well as defensively with our catchers and outfielders.  We are also excited about his recruiting connections in Ohio and much of the Midwest.  His energy, enthusiasm, and work ethic will be a great addition to our baseball staff."

Entering his fifth season at Valpo, Schmack has served as pitching coach and recruiting coordinator since joining the Crusader program.

"This title better describes what Coach Schmack has done for our program the last four years and what he will continue to do hopefully for a long time," Woodson said. "I feel very lucky to have Brian working at my side and this promotion to associate head coach is one that is well-deserved and well-earned."

For the 2010 season, the Crusader pitching staff finished the year with a 5.82 earned run average, ranking third in the Horizon League.  Most notably, junior right-handed pitcher Bryce Shafer was named the 2010 Horizon League Pitcher of the Year and was drafted in the 2010 Major League Baseball draft by the Chicago Cubs.

In 2009, Schmack guided a pitching staff which led the Horizon League in earned run average at 4.47.  In addition, junior closer Jarad Miller became the school’s save leader in just two years, while earning Third Team All-America accolades that same season.

“Brian is an extremely knowledgeable individual with a pro ball background,” Woodson concluded.  “He continues to do a standout job with our pitchers in developing them to not only succeed at Valparaiso, but also has the ability to help them make the transition to professional baseball.”