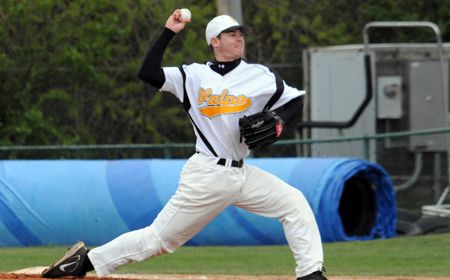 Two former members of the Valparaiso University baseball team, Bryce Shafer and Bo McClendon, recently completed their first season in professional baseball after they were drafted earlier this summer in the 2010 MLB Draft.

Shafer, a junior right-handed pitcher, ended his three year collegiate career and his college eligibility by signing with the Chicago Cubs in late July.  Shafer was drafted in the 49th round by the Chicago Cubs organization and began his professional career with the Cubs in the Arizona Rookie League.  He finished the season with a 1.80 ERA with one save in six appearances.

Shafer assembled one of the most accomplished pitching careers in Valparaiso University history in his three years on campus. In three seasons at Valpo, Shafer has posted an 18-12 record in 48 appearances, including 43 starts, while recording a 4.51 ERA.  His 18 wins are tied for fourth most in school history while his 261.1 career innings pitched are seventh most by anyone in a Crusader uniform.  He has struck out 250 batters, fourth most all-time at Valpo, while opponents hit just .264 against him in three years.

In his final season for the Crusaders as a junior, Shafer posted a 7-4 record with a 4.10 earned run average in 2010.  The six-foot, 170-pound, right-hander fanned 121 hitters in 105.1 innings or work, finishing just six strikeouts shy of the school’s single season record.  He was the Horizon League Pitcher of the Year and a First Team All-Horizon League selection for the Brown and Gold.

McClendon, an outfielder, was drafted in the 39th round by the Detroit Tigers and began his professional career in the Rookie Gulf Coast League.  McClendon finished the season for the Tigers with a .179 batting average and a .347 on-base percentage in 15 games.  He drew nine walks in 48 plate appearances and drove in three runs.