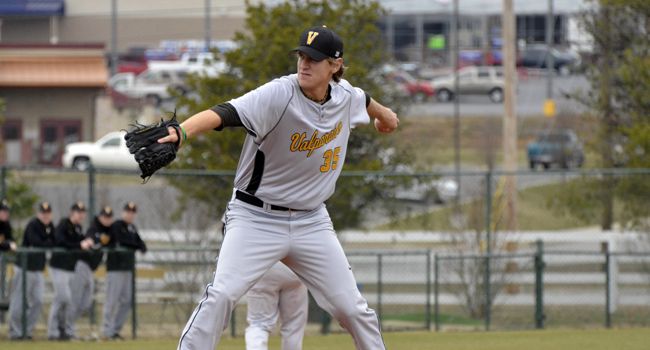 Darkness was the only winner on Friday afternoon at Reagan Field in Murray, Ky. as Valparaiso and Murray State battled for 12 innings only to remain in a 2-2 deadlock.

The game will resume in the top of the 13th on Saturday at noon prior to the regularly scheduled middle game of the series.

Murray State threatened in each of the first two innings.  In the first, the Racers put runners on second and third with one out but Tyler Deetjen (Saint Charles, Ill./East H.S.) induced a strikeout and groundout to end the threat.  Murray State advanced a runner to third with two outs in the second before another groundout ended the inning.

Valpo jumped on top in the fourth.  Will Hagel (Arlington Heights, Ill./Prospect H.S.) walked with one out and moved to second on a single by Elliott Martin (Irvine, Calif./University H.S.).  John Loeffler (Burnsville, Minn./Burnsville H.S.), making his Crusader debut, singled through the right side to plate Hagel with the game’s first run.  Billy Cribbs (Rochester, Mich./Rochester H.S.) added to the lead one batter later with a RBI single.

Deetjen turned in a solid performance, working seven shutout innings.  The senior southpaw scattered four hits and walked just one while striking out four, but ultimately earned a no decision.

“Deetjen really mixed his pitches well today,” head coach Tracy Woodson said afterwards.  “He got a lot of ground balls and got out of a couple early jams.  Our defense helped him out.”

The Racers cut Valpo’s lead in half in the eighth.  Ty Stetson and Brandon Elliott led off with back-to-back singles.  After they each moved up 90 feet on a sacrifice bunt, Stetson scored on a pinch hit ground out by Brandon Eggenschwiler.

Paul Ritzheimer led off the Murray State ninth with a single and moved to second on a sacrifice bunt.  Jarad Miller (Fort Wayne, Ind./Carroll H.S.) battled Colton Speed before retiring him on a 10-pitch strikeout for the second out of the inning.  Noah Zipko worked another long at bat before singling to right-center to tie the game at two, forcing extra innings.

Murray State looked to win the game in the 10th as Elliott was hit by a pitch to lead off the inning and moved to second on a wild pitch.  Travis Isaak followed with a single up the middle but Chris Manning (Lake Forest, Calif./El Toro H.S.) came up throwing and gunned down Elliott at the plate.

“In past years we may have folded after losing a lead like this,” Woodson stated.  “I’m happy that we stayed positive and kept battling.”

Martin had three hits for the Crusaders when play was stopped as Valpo had 12 singles on the afternoon.

“We need to come back tomorrow ready to play and get this first game,” Woodson concluded.