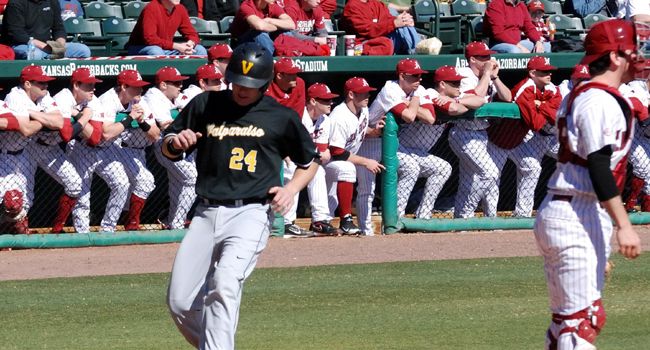 For the second straight day Valparaiso went toe-to-toe with the nation’s fourth-ranked team and on Saturday had the tying and go ahead runners in scoring position in the ninth, before falling to Arkansas 4-3 at Baum Stadium in Fayetteville, Ark.

“We played great today,” head coach Tracy Woodson said.  “We competed all day again and swung the bats well against some of the top arms.”

The Crusaders jumped on top in the opening inning, taking advantage of a pair of Arkansas errors.  Tanner Vavra (Menomonie, Wis./Menomonie H.S.) led the game off with an infield single and moved to second on an error.  Chris Manning (Lake Forest, Calif./El Toro H.S.) followed with a single up the middle to plate the game’s first run.  Another Razorback error allowed Will Hagel (Arlington Heights, Ill./Prospect H.S.) reached on an error, putting two men aboard.  A wild pitch moved both runners up 90 feet and Elliott Martin (Irvine, Ill./University H.S.) scored Manning on a ground out.  John Loeffler (Burnsville, Minn./Burnsville H.S.) made it 3-0 Crusaders with a single down the leftfield line.

“We took advantage in the inning and got some big RBI hits,” Woodson added.

Arkansas found the scoreboard in the third on a Bo Bingham RBI single and cut the deficit to 3-2 in the fifth following a run-scoring ground out.  The Razorbacks took the lead with a pair of runs in the sixth on a sacrifice fly and a go-ahead single by Matt Vinson.

Valpo threatened in each of the final three innings but could not plate the tying or go ahead runs.  In the seventh and eighth the Crusaders put a runner on second with one out but did not get the key hit.  In the ninth, Mark Johnson (Evanston, Ill./Evanston Township H.S.), making his collegiate debut on Saturday, led off with a single and moved up on a passed ball.  Vavra was then hit by a pitch and Andrew Bain (Indianapolis, Ind./Park Tudor H.S.) moved both runners up with a sacrifice bunt.  A pair of ground outs ended the game though.

“Manning hit a hard one-hopper back to the pitcher with one out that their pitcher made a nice play on,” Woodson said.

Kyle Wormington (Norman, Okla./North H.S.) started for Valpo and suffered the loss (0-1), allowing just four runs on six hits in 5.2 innings of work.  He struck out two and walked three.  Ben Mahar (Mundelein, Ill./Mundelein H.S.) had another good outing in relief, working the final 2.1 innings striking out three without allowing a base runner.

“I think Kyle was starting to tire a bit towards the end,” Woodson stated.  “Mahar was ridiculously good out of the bullpen though.  We pitched great yet again overall.”

Bingham had Arkansas’ only two hit game as the Razorbacks managed just six hits in the game.

Ryne Stanek earned the win (2-0), allowing seven hits and just one earned run in six innings.  Barrett Astin pitched the ninth to earn his first save of the season.

Valparaiso (2-3) and Arkansas (7-0) will wrap up their three-game weekend series on Sunday afternoon at Baum Stadium.  First pitch is slated for 1:05 p.m.