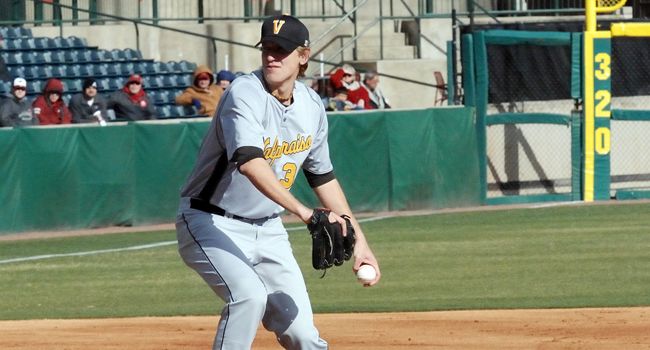 Tyler Deetjen (Saint Charles, Ill./East H.S.) went the distance, needing only 71 pitches on Saturday afternoon, but Gardner-Webb pushed across two runs in the fourth inning which proved to be the difference as the Bulldogs defeated Valparaiso 2-1 at J.H. Moss Stadium in Boiling Springs, N.C.

Deetjen scattered just seven hits and did not walk anyone while striking out two, but suffered the loss (0-2).

“Deetjen was really good again today,” head coach Tracy Woodson said.  “He only needed like 70 pitches.  Unfortunately we couldn’t get the big hit we needed.”

Valpo threatened in each of the first three innings, stranding two men on base in each inning.  With the game scoreless in the fourth, Scott Johnson singled to center with one out and stole second.  With two out, Scott Coleman singled to right and took second on the throw, putting runners on second and third.  John Harris followed with a single that dropped in left, plating both runners.

“We needed that big hit early,” Woodson stated. “We didn’t get it and thus weren’t able to get the lead early.”

Valpo left two more runners on in the fifth before finally breaking through in the seventh.  Mark Johnson (Evanston, Ill./Evanston Township H.S.) led off with a double and moved to third on a sacrifice bunt.  Andrew Bain (Indianapolis, Ind./Park Tudor H.S.) cut the Bulldogs’ lead in half with an infield single, but that would be the end of the Crusaders’ offense.

“We just could not get anything going late today,” Woodson concluded.

Bain was the only Crusader with two hits as Valpo tallied seven on the afternoon.  Johnson and Harris each had two hits for Gardner-Webb.

Conner Scarborough started and earned the win (1-0) for Gardner-Webb (7-3), allowing just the one run and six hits in 6.1 innings of work.  He walked one and struck out five.  Adam Izokovic picked up his first save of the year with a one-two-three ninth inning.

Valparaiso (3-4) will return to the diamond on Sunday afternoon, traveling to Spartanburg, S.C. to face Wofford.  First pitch is slated for 12 p.m. CST.