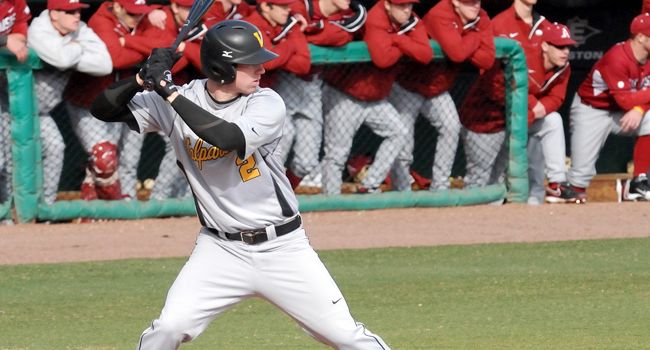 Valparaiso rallied from a four-run deficit midway through Sunday’s game and scored three times in the 11th inning on the way to an 8-7 victory over Wofford at King Field in Spartanburg, S.C. for the Crusaders’ third extra inning victory of the young season.

“We got behind early and just battled,” head coach Tracy Woodson said.  “We had some great at bats.  It was so much different than yesterday.  Today we stayed patient at the plate and looked for pitches to hit.”

Chris Manning (Lake Forest, Ill./El Toro H.S.) led off the 11th with a single, his fourth hit of the day, and Will Hagel (Arlington Heights, Ill./Prospect H.S.) followed with a double the opposite way.  Elliott Martin (Irvine, Calif./University H.S.) delivered a sacrifice fly to give the Crusaders a 6-5 lead before Billy Cribbs (Rochester, Mich./Rochester H.S.) singled to center to put runners on the corners with one out.  After Steven Scoby (Delton, Mich./Delton Kellogg H.S.) was intentionally walked to load the bases, Bobby Martin (Crystal Lake, Ill./Prairie Ridge H.S.) came through with a two-run single to give Valpo a three-run advantage.

Mac Doyle hit a two-run home run for Wofford in the bottom of the 11th to close within one, but Kevin Upp (LaPorte, Ind./LaPorte H.S.) struck out Eric Brenk with a man on to end the game and pick up his first save of the season.

“It’s tough to go on the road as long as we do and stay sharp each day, but so far we have done a pretty good job of it,” Woodson added.

The Terriers jumped on top with three unearned runs in the opening inning, taking advantage of a Crusader error.  Brenk had a two-run single and eventually scored on David Roney’s double.

Manning singled home Mark Johnson (Evanston, Ill./Evanston Township H.S.) for Valpo’s first run of the game in the third inning before Wofford tallied single runs in the fourth and fifth to take a 5-1 lead.

A Bobby Martin single in the sixth scored Cribbs with an unearned run and the Crusaders added another unearned tally in the seventh on another Manning hit, plating Tanner Vavra (Menomonie, Wis./Menomonie H.S.), who reached on a two-base error.

Bobby Martin had three hits in addition to Manning’s four as the Crusaders pounded out 14 total hits on the afternoon.  Matthew Kaskow had three hits to lead Wofford’s 15-hit attack.

Kevin Wild (Brown Deer, Wis./Brown Deer H.S.) started an worked six innings for the Crusaders, allowing five runs, only two of which were earned, and nine hits while striking out three.  Jarad Miller (Fort Wayne, Ind./Carroll H.S.) earned his second win (2-0) of the year with three innings of scoreless relief, striking out four.

Valparaiso (4-4) will return to action on Monday in Spartanburg, traveling to South Carolina Upstate for a 12 p.m. CST contest.