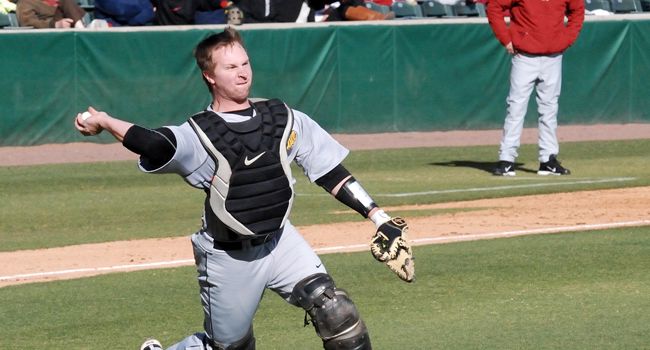 Valparaiso jumped out to an early lead on Tuesday afternoon against Wake Forest but a nine-run fifth inning by the Demon Deacons proved to be too much for the Crusaders to overcome as the Brown and Gold fell 13-4 at Wake Forest Baseball Park in Winston Salem, N.C.

The Crusaders jumped on top in the opening inning as the first four batters reached base.  Tanner Vavra (Menomonie, Wis./Menomonie H.S.) led off the game with a triple to the gap in left-center and scored on a single up the middle by Steven Scoby (Delton, Mich./Delton Kellogg H.S.).  Chris Manning (Lake Forest, Calif./El Toro H.S.) drew a walk before both Scoby and Manning scored when Will Hagel (Arlington Heights, Ill./Prospect H.S.) hit a grounder to shortstop that was both bobbled and then thrown away for two errors, giving Valpo a 3-0 lead.

Wake Forest answered with two unearned runs in the bottom of the first before Valpo tacked on a fourth run in the second.  Andrew Bain (Indianapolis, Ind./Park Tudor H.S.) singled with one out and scored two batters later when Scoby tripled to the gap in right-center.

Kevin Jordan homered with two outs in the bottom of the second to bring Wake Forest within one, 4-3, and the game stayed that way until the fifth.

The Demon Deacons registered seven hits and scored nine times to take the lead 12-4.  Charlie Morgan had a two-run triple and Carlos Lopez delivered a three-run double for the big hits to put the game out of reach for the hosts.  Wake Forest added one final tally in the sixth to take the opening game of the midweek series.

Vavra, Scoby, Bain, and Billy Cribbs (Rochester, Mich./Rochester H.S.) each had two hits for the Crusaders as part of their nine-hit attack.  Wake Forest pounded out 16 hits on the afternoon, including three each by Lopez and Brett Armour.

Will Robinson (Placentia, Calif./Valencia H.S.) started and suffered the loss (1-1) for the Crusaders, allowing six runs, four of which were earned, and seven hits in 4.1 innings of work.  He walked four and struck out one.  Jack Fischer earned the win (1-1) in relief for the Demon Deacons, pitching four innings of shutout baseball, allowing just three hits.

Valparaiso (4-6) and Wake Forest (10-4) will wrap up their two-game midweek series on Wednesday afternoon at Wake Forest Baseball Park.  First pitch is slated for 3 p.m. CST.