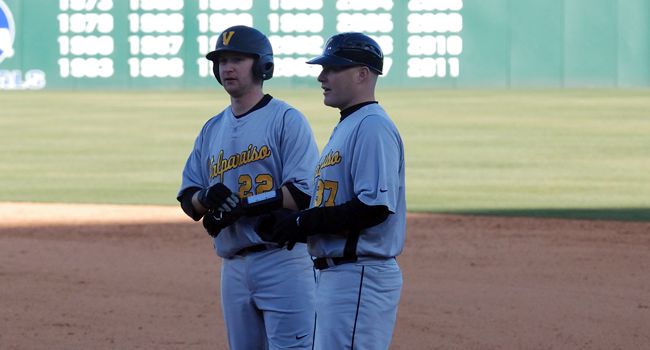 Valparaiso wrapped up its three-game weekend series at Campbell on Saturday afternoon, dropping both ends of the doubleheader by scores of 3-2 and 7-3 at Taylor Field in Buies Creek, N.C.

The Crusaders rallied late in the opener to tie the game at two but the Camels scored an unearned run in the ninth to pick up the victory.

Campbell jumped on top with a pair of runs in the fourth inning on a RBI double by Jake Kirkland and a run-scoring single off of the bat of David Olson.

Kevin Wild (Brown Deer, Wis./Brown Deer H.S.) allowed just one  hit after the fourth until he left the game in the seventh, giving Valpo another quality start.

Valpo tied the game in the eighth as John Loeffler (Burnsville, Minn./Burnsville H.S.) doubled and moved to third on a single by Elliott Martin (Irvine, Calif./University H.S.).  Kyle Schneider (Mishawaka, Ind./Penn H.S.) drove in his first run as a Crusader, a pinch-hit sacrifice fly to cut the Campbell lead in half.  After Steven Scoby (Delton, Mich./Delton Kellogg H.S.) singled and Chris Manning (Lake Forest, Calif./El Toro H.S.) drew a walk to load the bases, Will Hagel (Arlington Heights, Ill./Prospect H.S.) tied the game with an infield single.

The game appeared headed to extra innings as Valpo retired the first two Camels in the ninth before an error and a single put runners on the corners.  Michael Felton reached on an infield single to plate the winning run in the opener.

Wild started and went seven innings for the Crusaders, allowing the two runs on five hits.  He struck out four before giving way to Zack Walsh (Batesville, Ind./Batesville H.S.), who suffered the loss (0-1), allowing the unearned run in the ninth.

“Wild pitched great today,” head coach Tracy Woodson said.  “Our pitching has been solid and I can’t really complain about that.  We just need to get our offense going.”

Matt Marksberry picked up the win (1-0) in relief for the Camels, pitching the final 1.1 innings.

Campbell (12-3) scored four times in the opening inning to take the early lead, one it would not relinquish.  Three of the runs were unearned, two coming on a single by Blake Boyce.

Valpo got a run back in second as Billy Cribbs (Rochester, Mich./Rochester H.S.) singled, stole second, and scored on Martin’s single.  The Camels answered in the bottom of the inning with two more runs though, on a single by Felton.

“We battled back after getting behind in the second game, but we just didn’t seem to have a lot of energy in that one,” Woodson added.

The Crusaders cut the lead to 6-3 in the top of the seventh as Tyler Weddington (Orange Park, Fla./Culver Military Academy) led off being hit by a pitch and moved to second on a Scoby single.  Martin followed with a single scoring Weddington, moving Scoby to third. Schneider followed with a base hit to plate Scoby, bringing the Crusaders within three.

The Camels added an insurance run in the bottom of the seventh with an unearned tally on the way to the weekend sweep of the Crusaders.

Andrew Bain (Indianapolis, Ind./Park Tudor H.S.), Schneider, Manning, and Martin each had two hits for the Crusaders as part of their nine-hit effort.

Boyce and Felton each had three hits and drove in three runs for the Camels.

Valparaiso (4-10) will have a day off on Sunday before traveling to Rock Hill, S.C. on Monday for a 5 p.m. CDT contest at Winthrop.