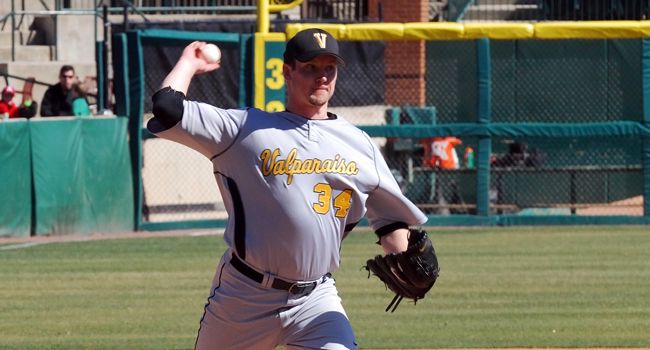 “We pitched as well as we are capable of pitching today,” head coach Tracy Woodson said after the twinbill.  “It was awesome to watch.  Our defense was outstanding and turned in some terrific efforts.  You win games with pitching and it made today lots of fun.”

Wild was fabulous in game two.  He walked four, including back-to-back base on balls in the sixth to put two runners aboard, but seemed to cruise until the eighth inning.  A catcher’s interference call followed by another error put two Panthers aboard with no one out.  The senior still had not surrendered a hit in the ball game, but following a sacrifice bunt had runners on second and third with just one out.  A ground out to second with the infield in provided the second out of the inning, before he walked the bases loaded.  Wild induced a ground out to first off of the bat of Paul Hoenecke and kept the no-hitter intact.

“I think it was awesome the way that Kevin pitched with so many of his friends and family coming down from his hometown,” Woodson added.  “He’s been working on a two-seamer and it was cutting today.  He put the ball where he wanted to.  He was spot on."

Meanwhile, Milwaukee’s Cale Tassi was nearly matching Wild.  He gave up four hits through eight innings but kept the Crusaders off of the scoreboard.  Valpo threatened in the sixth with runners on first and third with one out, but the Panthers retired Tanner Vavra (Menomonie, Wis./Menomonie H.S.) at the plate on a squeeze bunt attempt.

Wild took his no-hitter into extra innings before Ryan Solberg doubled to lead off the tenth.  Steven Scoby (Delton, Mich./Delton Kellogg H.S.) made an outstanding diving attempt at the ball that landed on the foul line.

Jarad Miller (Fort Wayne, Ind./Carroll H.S.) came on in relief of Wild following the double and gave up a sacrifice bunt putting a runner on third.  After he hit a batter with one out, he induced a come-backer to the mound for a double play to escape the threat.

Scoby then singled with one out in the bottom of the tenth and Cribbs drove him home with a double to the gap in left-center on a 3-2 pitch with the runner in motion to plate the winning run.

Wild finished with a no decision despite his brilliance, allowing just the one hit and four walks in nine plus innings of work.  He struck out six.  Miller picked up the win (3-1), getting the Crusaders out of the tenth.

Tassi also left with a no decision in the ninth, pitching 8.1 innings allowing just four hits.  He walked one and struck out five.  Greg Blohowiak suffered the loss (0-1), allowing the two hits in the tenth.

The opener saw just as impressive of a pitching performance from Deetjen.  The senior southpaw went the distance, scattering six hits for his first collegiate shutout.  He struck out six and did not walk anyone, needing just 102 pitches for the victory (1-2).

“Deetjen throws the ball over the plate,” Woodson said.  “He changes speeds well and it was very effective today.  We helped him out taking advantage of a couple of their errors early.”

Valpo jumped on top in the second as Chris Manning (Lake Forest, Calif./El Toro H.S.) led off the inning with a single and scored on John Loeffler’s (Burnsville, Minn./Burnsville H.S.) double to the gap in right-center.  Elliott Martin (Irvine, Calif./University H.S.) laid down a bunt attempt and reached on an error, while another throwing error allowed Loeffler to score, giving the Crusaders a 2-0 lead.

Valpo added three more runs in the third.  Bain led off with a single and Will Hagel (Arlington Heights, Ill./Prospect H.S.) followed with a one-out hit.  Manning walked to load the bases and Loeffler grounded into a fielder’s choice that plated two runs due to a throwing error.  Martin added a squeeze bunt to score Manning and Valpo had a 5-0 advantage.

Vavra added a RBI hit in the sixth and Cribbs plated an unearned run in the seventh with a sacrifice fly.

Bain had two hits in the opener, as well as in game two to finish 4-for-9 on the day while Vavra had three hits in game one and went 4-for-8 on the afternoon.  Loeffler also had a two-hit game to start the day.

Eric Semmelhack suffered the loss (1-4) for Milwaukee, allowing six runs, only three of which were earned, and seven hits in six innings of work.