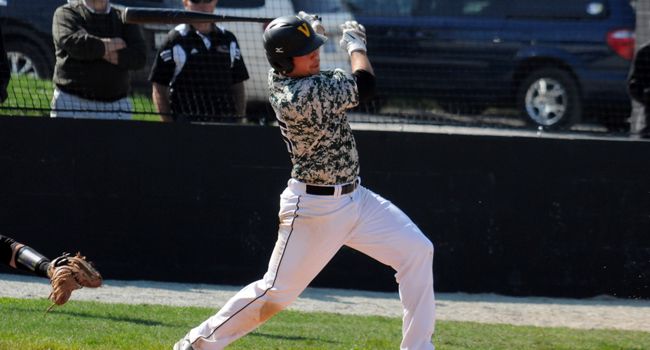 With the Crusaders trailing 2-1 entering the bottom of the eighth, Tanner Vavra (Menomonie, Wis./Menomonie H.S.) and Will Hagel (Arlington Heights, Ill./Prospect H.S.) delivered back-to-back singles to lead off the inning.  After Chris Manning (Lake Forest, Calif./El Toro H.S.) bunted the runners up 90 feet, Martin bounced a single back up the middle into centerfield to put Valpo on top.  For Martin, it was his third hit of the day.

“Again we kept battling and battling all day,” head coach Tracy Woodson said after the win.  “We got a couple of guys on and Martin delivered a big two-out hit.  He found holes today and got the job done.”

Jarad Miller (Fort Wayne, Ind./Carroll H.S.) came on and pitched a scoreless ninth to earn his second save of the season and 30th in his Crusader career.

“Jarad’s been really good for us again this year,” Woodson added.  He’s athletic and able to make plays like the final out where he gets off of the mound to field the ball.  I think he may be pitching better than before he got hurt two years ago.”

Milwaukee (6-14, 2-4 Horizon) scored its first run of the weekend series in the second inning with back-to-back singles, a sacrifice bunt, and a ground out off of the bat of Jim Lundstrom.

Valpo immediately answered to tie the game in the bottom of the inning as Bobby Martin (Crystal Lake, Ill./Prairie Ridge H.S.) singled to center to plate Elliott Martin.

Both starters, Kyle Wormington (Norman, Okla./North H.S.) for Valpo and Mike Schneider for Milwaukee, pitched well, with the game remaining tied into the fifth.

Ludstrom singled to lead off the inning for the Panthers, moved to second on a bunt and stole third.  With two outs, Paul Hoenecke singled into left-center to put the visitors on top 2-1.

The game stayed that way until Valpo came through with the two big runs in the eighth.

“Once again our pitching was really good,” Woodson concluded.  “You win games playing defense and throwing strikes and we did a good job of that both today and all weekend long.”

John Loeffler (Burnsville, Minn./Burnsville H.S.) and Vavra each had two hits on the day in addition to Elliott Martin’s three, giving the Crusaders three players with multi-hit efforts.

Valparaiso (8-14, 4-2) will continue its homestand next weekend with a three-game series against Wright State.  First pitch in the series opener on Friday afternoon is slated for 3 p.m. at Emory G. Bauer Field.