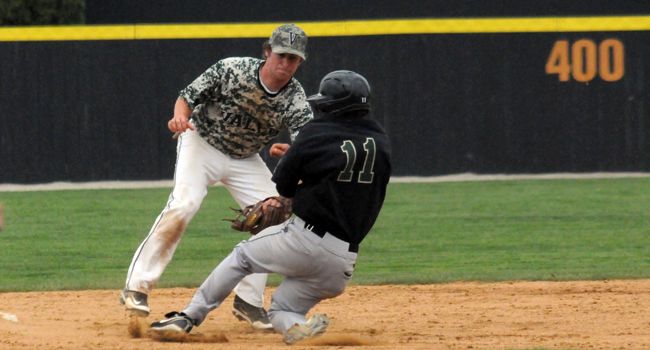 Valparaiso scored one run and had runners on the corners with one out in the ninth inning on Sunday afternoon at Emory G. Bauer Field, but could not complete the comeback, falling 4-3 to Wright State in the final game of a three-game weekend series.

“Today seemed like the same story,” head coach Tracy Woodson said after the game.  “We pitched well enough to win the game and did a good job defensively.  It’s just not happening with the bats right now.  We need to be more aggressive in hitting counts and we are not doing that.”

The Raiders jumped on top in the opening inning as Hibberd, who led off the game being hit by a pitch, scored on a two-out single by Ryan Ashe.

The Crusaders answered with a two-out run of their own in the bottom of the inning as Will Hagel (Arlington Heights, Ill./Prospect H.S.) came across home plate on a single by Loeffler.

Hibberd doubled with one out in the third for Wright State and scored two batters later on a single by Tristan Moore to put the Raiders back on top for good.  Kody Krizman delivered a two-out hit in the sixth to score Moore, making it 3-1 visitors.

Valpo fought back in the sixth, as Tanner Vavra (Menomonie, Wis./Menomonie H.S.) was hit by a pitch, moved to second on a walk and third on a fly out.  Elliott Martin’s (Irvine, Calif./University H.S.) right back to the box which ricocheted off of starting pitcher Taylor Braun scored the Crusaders’ second run of the game.

Wright State (15-10, 7-2 Horizon) added what proved to be an important insurance run in the seventh on a sacrifice fly off of the bat of Moore as the Crusaders tried to rally late.

Braun earned the win (2-0) for the Raiders, pitching six innings while allowing two runs on three hits and striking out six.  Schum picked up his fifth save of the year, despite allowing a run on three hits in the ninth.  Kyle Wormington (Norman, Okla./North H.S.) suffered the loss, giving up all four runs on eight hits in seven innings.

Loeffler was the lone Crusaders with two hits as Valpo managed just seven on the afternoon.  Sam Picchiotti paced Wright State with a 3-for-4 day at the plate.

Valparaiso (8-17, 4-5) will step out of Horizon League action on Tuesday afternoon, traveling to Kalamazoo, Mich. for a game against Western Michigan.  First pitch is set for 2 p.m. CDT.