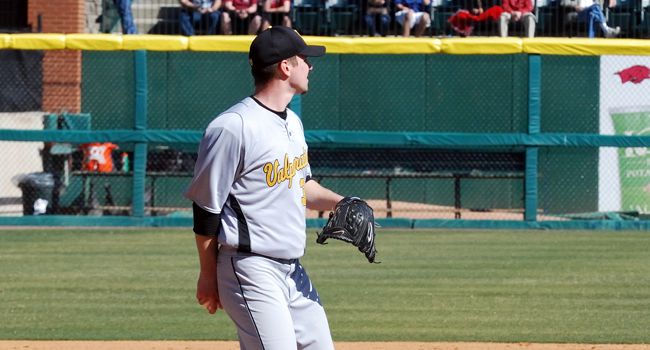 Wild did not walk anyone and struck out five to earn the victory (2-1).

“Wild was very good tonight and efficient with his pitches,” head coach Tracy Woodson said.  “I’m disappointed with our offense.  We should have scored three or four more runs to give him some cushion.  We need to be able to add on and didn’t do that tonight.”

UIC struck first with a run in the second inning.  Alex Jurich and Alex Grunenwald had back-to-back singles to lead off the inning and moved up 90 feet on a sacrifice bunt.  Nick Addison then delivered a sacrifice fly to center to put the Flames on top 1-0.

Valpo answered in the top of the third.  Grant Yoder (Fort Wayne, Ind./Snider H.S.) led off with a single and Billy Cribbs (Rochester, Mich./Rochester H.S.) followed with a walk.  After a sacrifice bunt by Steven Scoby (Delton, Mich./Delton Kellogg H.S.) moved the runners into scoring position, Andrew Bain (Indianapolis, Ind./Park Tudor H.S.) came through with a game-tying single to left.

The Crusaders took the lead in the fifth as Scoby led off with a single.  Tanner Vavra (Menomonie, Wis./Menomonie H.S.) was hit by a pitch and both runners moved  up on a ground out.  With two outs, Elliott Martin (Irvine, Calif./University H.S.) singled to right-center, scoring both runners, giving Valpo a 3-1 advantage.

“Martin got the big two-out hit for us,” Woodson stated.

Wild cruised through the middle five innings before a double by Alex De LaRosa with one out in the eighth gave UIC a runner in scoring position.  After he moved to third on a wild pitch, Cody Dykema’s sacrifice fly brought the Flames within a run.

The Flames threatened in the ninth, putting a runner on first with two outs, but Wild got Joe Betcher to fly out to deep left to end the game.

Bain went 3-for-4 for the Crusaders while Scoby had two hits and Martin had two runs batted in.  Valpo finished the game with seven hits.

“Bain got on base and had a big RBI hit,” Woodson added.  “When the top of the order gets on base it makes us go.”

Grunenwald paced UIC with three of the Flames’ seven hits.

“We need to come back tomorrow and finish the job,” Woodson concluded.