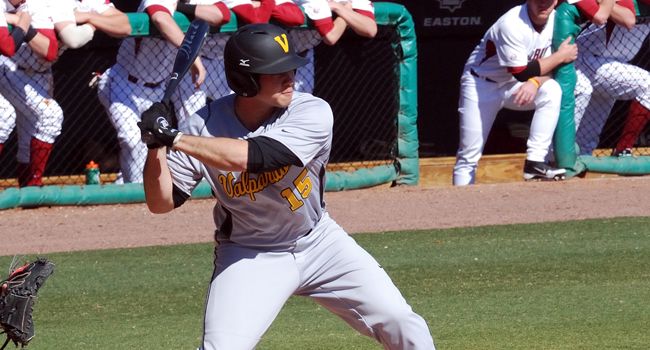 Elliott Martin (Irvine, Calif./Saddleback H.S.) hit a two-run home run for Valparaiso to account for all of the Crusaders’ offense on Saturday afternoon as the Brown and Gold fell 3-2 to UIC in the finale of a three-game weekend series at Les Miller Field in Chicago, Ill.

“I was disappointed with our bats today,” head coach Tracy Woodson said.  “With the wind blowing out we had an opportunity for a good day of hitting and just didn’t do it.”

Martin’s two-run shot to left field was his first of the season and scored Tanner Vavra (Menomonie, Wis./Menomonie HS.), who  walked to lead off the fourth inning, giving the Crusaders a 2-0 lead.

UIC cut the lead in half in the bottom of the inning as Alex Grunenwald singled home Jon Ryan for the Flames’ first run.  The hosts took the lead in the sixth with four singles.  Joe Betcher’s bases loaded hit tied the game at two and Alex Jurich scored on a fielder’s choice off the bat of Nick Addison to give the Flames the lead, which they would not relinquish.

Kyle Wormington (Norman, Okla./North H.S.) went the distance for the Crusaders, allowing 11 hits and the three runs while striking out four.  He did not walk anyone but suffered the loss (1-5).  Mike Schoolcraft earned the win (1-0) in relief for UIC, pitching 3.1 innings of scoreless baseball, allowing two hits.  Matt Heaslip pitched the final two innings for his first save of the year.

Martin finished the game 2-for-3 for Valpo, as the Crusaders managed just six hits on the afternoon.  Four different players had two-hit efforts for UIC (12-17, 6-6 Horizon).

Valparaiso (10-19, 6-6) will return to Emory G. Bauer Field on Monday afternoon to host Grace in non-conference action, beginning at two game homestand.  First pitch against the Lancers is slated for 3 p.m.