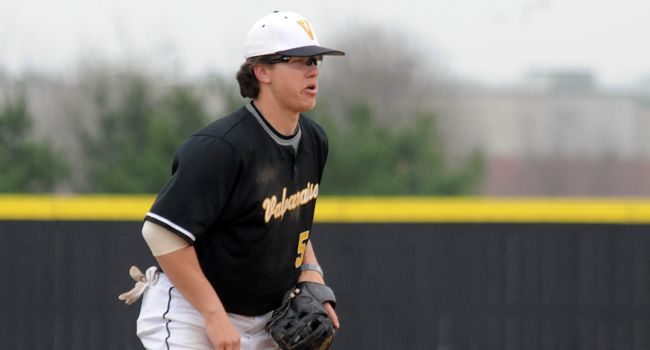 Tanner Vavra had two hits and two runs batted in for the Crusaders in the win
Valparaiso at Youngstown State | April 15, 2012
Related Links
Related Links

Valparaiso wrapped up a three-game weekend sweep of Youngstown State on Sunday afternoon with a 5-4 victory over the Penguins at Eastwood Field in Niles, Ohio.

“It’s hard to win three games in a series, especially on the road,” head coach Tracy Woodson said.  “This wasn’t the prettiest game in the world, but we got the job done.”

Kyle Wormington (Norman, Okla./North H.S.) went eight strong innings for the win (2-5), allowing just three runs, only two of which were earned, and six hits.  He struck out four and walked just one.  He retired the final 12 hitters he faced.

“Worm settled down nicely,” Woodson said.  “He left the ball up a little early.  He was very effective with the changeup and slider when he needed them.”

The Crusaders scored first for the third time in the series as John Loeffler (Burnsville, Minn./Burnsville H.S.) doubled in the third inning and moved to third on Chris Manning’s (Lake Forest, Calif./El Toro H.S.) single.  A double play allowed Loeffler to cross the plate.

Youngstown State (4-30, 2-13 Horizon) tied the game at one in the bottom of third, taking advantage of a Crusader error.  With two outs, David Leon singled to drive home Dan Hurlimann.  The Penguins took a 2-1 lead in the fourth when Jeremy Banks doubled home Jason Shirley, giving the hosts their first advantage of the weekend.

“We played a little small ball today,” Woodson added.  “It’s not always my favorite thing in the world to do, but we had some guys bunt for hits and got the job done.”

Marcus Heath led off the Youngstown State fifth with a triple and scored one batter later on a groundout to tie the game at three.

The Crusaders retook the lead in the seventh as Vavra delivered a two-out single, scoring Martin who was hit by a pitch to lead off the inning.  A much needed insurance run was added in the top of the ninth as Cribbs doubled and scored on a single by Elliott Martin (Irvine, Calif./University H.S.), putting Valpo on top 5-3.

The Penguins threatened in the ninth, scoring a run on a ground out by David Leon, scoring Craig Goubeaux.  A two-out walk put the tying run aboard, but Jarad Miller (Fort Wayne, Ind./Carroll H.S.) struck out Drew Dosch to end the game and pick up his fourth save of the season.

Vavra, Elliott Martin, and Manning each had two hits apiece as part of Valparaiso’s 11-hit attack on the afternoon.

Blake Aquadro suffered the loss (0-7) for Youngstown State, pitching 6.1 innings while allowing four runs, only two of which were earned, and six hits.

Valparaiso (15-19, 9-6) has won seven of its last eight games overall and five straight as the Horizon League has reached the midway point in the conference schedule with the Crusaders in second place in the standings.  The Crusaders will return to the diamond on Tuesday evening, traveling to Terre Haute, Ind. to face Indiana State in non-conference action.  First pitch is slated for 5 p.m.