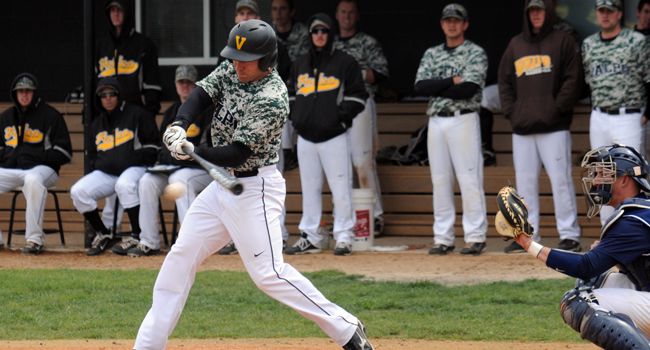 Kevin Wild (Brown Deer, Wis./Brown Deer H.S.) tossed a four-hit shutout in the opener on Sunday and Spencer Mahoney (LaGrange Park, Ill./Lyons Township H.S.) drew a walk-off walk in the nightcap as Valparaiso won both games of a doubleheader against Butler 1-0 and 3-2 at Emory G. Bauer Field to complete a weekend sweep of the Bulldogs.

“We always want to win two out of three,” head coach Tracy Woodson said after the twinbill.  “It wasn’t a pleasant day to play as a hitter with the cold and the wind but I felt we had opportunities all day long.  We didn’t execute bunts most of the day, but had a big one in the ninth along with a couple of big hits to get the sweep.”

Wild was masterful for the Crusaders yet again in Sunday’s opener, tossing his first collegiate shutout and second complete game of the season in the win (4-1).  The senior right-hander walked just three and struck out five in going the distance.

“Wild does not walk guys and that keeps runners off base and out of scoring position, especially to lead off innings,” Woodson said.  “Our defense was good all day and turned a big double play behind him.”

Butler had two scoring threats early in the game, putting runners on the corners with one out in the first before back-to-back strikeouts ended the inning.  The Bulldogs put runners on first and third against in the third, this time with two outs, but Wild induced an inning-ending ground out.  He gave up two two-out singles in the fifth as well, but those would be the last hits he would allow on the day.

Valpo manufactured the game’s only run in the second as John Loeffler (Burnsville, Minn./Burnsville H.S.) was hit by a pitch to lead off the inning and moved to second on Mahoney’s sacrifice bunt.  With two outs, Steven Scoby (Delton, Mich./Delton Kellogg H.S.) delivered the big hit, a single into right that plated Loeffler with the game’s only run.

The Bulldogs’ Brad Schnitzer nearly matched Wild, also going the distance.  He allowed just five Valpo hits and walked one while striking out two before taking the loss (3-1).

Scoby went 2-for-3 with the big RBI for Valpo while Pat Gelwicks had three of Butler’s four hits in the opener.

The Crusaders had to battle back twice in game two to complete the sweep.  Butler (19-21, 7-11 Horizon) scored in the opening inning on a single by Gelwicks, a sacrifice bunt, and a RBI hit by Jimmy Risi.

Valpo answered in the bottom of the second as Billy Cribbs (Rochester, Mich./Rochester H.S.) singled home Loeffler with two outs to tie the game at one.

A Marcos Calderon home run to lead off the fifth put the Bulldogs on top, but Valpo hurler Kyle Wormington (Norman, Okla./North H.S.) kept the Bulldogs in check after the long ball.  He finished with a no decision pitching eight innings, allowing two runs on six hits and one walk.  The junior struck out seven.

“Worm did a great job of keeping us close,” Woodson added.  “Elliott Martin made a couple of big plays at third and Spencer was terrific at short.”

Wormington’s effort allowed Valpo to rally in the ninth.  Andrew Bain (Indianapolis, Ind./Park Tudor H.S.) reach on a throwing error to start the inning and Tanner Vavra (Menomonie, Wis./Menomonie H.S.) laid down a perfect bunt and beat it out for a single.  After a fielder’s choice retired Bain at third and moved Vavra to second and put Manning aboard at first, Will Hagel (Arlington Heights, Ill./Prospect H.S.) singled to left to load the bases.  Elliott Martin (Irvine, Calif./University H.S.) hustling down the line to beat out an infield single to short, plating Vavra to tie the game at two.  With two outs, Mahoney drew a full count walk to score Manning with the game’s winning run.

“Things are going our way right now,” Woodson concluded.  “We’ve played so many close games this year and I really think that has made us a better team. We know we can come through late in games.”

Sean Kennedy (Gurnee, Ill./Warren Township H.S.) earned his first victory (1-0) as a Crusader, pitching a one, two, three ninth inning while Chase Byerly suffered the loss (1-2), allowing the pair of unearned runs in the ninth.

Martin went 3-for-5 in the nightcap for the Crusaders while Vavra, Mahoney, and Scoby all had two hits as part of Valpo’s 13-hit effort in game two.

Winners of 10 of its last 12 overall and six straight Horizon League games, Valparaiso (18-20, 12-6) will travel to Fort Wayne, Ind. on Tuesday afternoon for a non-conference tilt with IPFW.  First pitch is slated for 2 p.m. CDT.