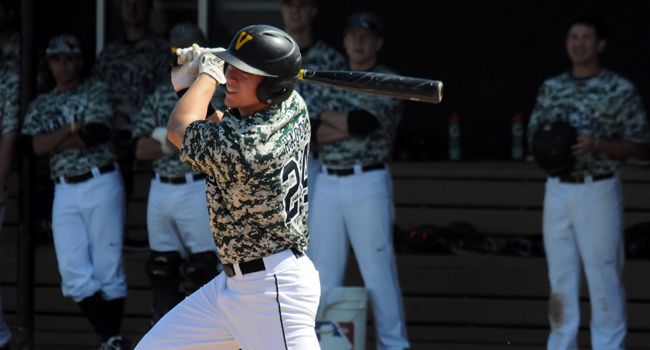 This Week in Crusader Baseball: Valparaiso takes its four-game winning streak north to Wisconsin this weekend as the Crusaders take on Milwaukee in a three-game Horizon League series.  The Brown and Gold has won nine of its last 10 games overall and 11 of the last 13 to pull within two games of first place Wright State in the Horizon League standings.

Head Coach Tracy Woodson: Tracy Woodson, the 16th head coach in Valparaiso University history, is in his sixth season at the helm of the Crusaders and has a 139-177 (.440) record both for his career as well as at Valpo.  Woodson ranks fourth in school history for career wins by a head coach.  A member of the Los Angeles Dodgers 1988 World Champion team, he has also managed in the minor leagues through the AAA level.

Wrapping Up Recent Action: Valpo swept a three-game series against Butler at home last weekend.  After Friday’s game was postponed, the Crusaders won Saturday’s series opener 4-2, scoring all four runs in the opening inning.  In game one of Sunday’s doubleheader, Kevin Wild went the distance for a 1-0 shutout victory over the Bulldogs.  In Sunday’s nightcap, Valpo trailed 2-1 heading into the bottom of the ninth before plating a pair of runs, including a bases loaded walk to Spencer Mahoney, for a 3-2 victory.  The Crusaders extended the winning streak to four on Tuesday as Grant Yoder hit a three-run home run in the top of the ninth as Valpo rallied for an 11-8 win at IPFW.

Scouting Milwaukee: The Panthers have won four straight games following a sweep of Youngstown State last weekend and a 13-2 victory over Northern Illinois on Tuesday afternoon.  Michael Porcaro leads the Panthers offensively batting .321 while Will Fadness has hit a team-leading three home runs.  Paul Hoenecke has driven home a team-best 24 runs as Milwaukee is hitting .261 as a team.  The Panthers pitching staff is ranked second in the conference behind Valpo with a 3.76 ERA, and are holding the opposition to just a .252 batting average.

Previously vs. Milwaukee: Valpo swept a three-game series from the Panthers at Emory G. Bauer Field March 23-25.  After Friday’s game was postponed due to rain, Tyler Deetjen threw a six-hit shutout in the opener of Saturday’s doubleheader as the Crusaders downed the Panthers 7-0.  Saturday’s nightcap saw Kevin Wild take a no-hitter into the 10th inning before allowing just one hit as Billy Cribbs drove home the winning run in the bottom of the 10th for a 1-0 Valpo victory.  Cale Tassi worked 8.1 innings for the Panthers, allowing just four hits and no runs.  In Sunday’s series finale, Elliott Martin went 3-for-4 and drove home a pair of runs in the bottom of the eighth as Valpo notched a 3-2 win over Milwaukee.

Wild Picks Up Third League Honor: Kevin Wild was named Horizon League Pitcher of the Week for the third time this season after tossing his first collegiate shutout last Saturday in a 1-0 victory over Butler, allowing just six hits.  In his six Horizon League starts this season, Wild is 4-1 with a 1.69 ERA and two complete games.  He has held conference foes to just a .175 batting average and has struck out 31 in 48 innings of work.

Hurlers Earn National Honor: Valpo’s pitching staff was named the National Pitching Staff of the Week by insidepitching.com for their efforts last week.  In four games the pitchers completed 43 innings of work.  They allowed just four earned runs and 26 hits while striking out 29 opposing hitters.

Making a Hometown Splash: Grant Yoder made the return to his hometown of Fort Wayne a memorable one on Tuesday afternoon, hitting the game-winning three-run home run in the top of the ninth in the 11-8 victory over IPFW.  Yoder went 2-for-3 in the game with four runs batted in, a walk, and was hit by a pitch.

Deetjen on Career Charts: Tyler Deetjen ranks eighth in Valparaiso history having logged 265.0 innings of work on the mound this season.  The southpaw just passed Bryce Shafer (2008-2010) and is just 8.2 innings behind Jeff Brooks (1992-1995) for seventh on the career list.

Leading After Eight: Valpo is a perfect 13-0 this season when taking a lead into the ninth inning.

No Free Passes Here: Valpo’s pitching staff ranked 10th in all of NCAA Division I entering the week allowing just 2.35 walks per nine innings of work this year.  Individually, Tyler Deetjen ranks fifth in the country with a 0.72 walk per nine inning rate, having issued just six free passes in 75.0 innings of work.  Deetjen also ranks 12th in the country with a 7.17 strikeout-to-walk ratio.

Closing Time: Jarad Miller has picked back up where he left off after missing the last year and a half with an injury, adding to his school record-setting career save total.  Miller recorded two saves against Youngstown State and now has four for the year.  His 32 career saves are 18 more than any other player in program history after setting the school’s single season record with 17 during his All-American season in 2009.

This and That: Grant Yoder enters the weekend with an eight-game hitting streak ... John Loeffler has reached base safely in 15 consecutive games ... Valpo has played nine extra innings through the first 10 weeks of the season ... after the Crusaders were a season-low 10 games below .500 on April 3 (8-18), the Crusaders have won 11 of 13 to move within one game of the break even mark heading into the weekend ... Elliott Martin has plated 11 of 13 runners in scoring position with less than two outs this season ... Will Hagel has a team-leading 14 two-out RBIs ... the Crusaders are outscoring their opponents 65-41 from the seventh inning on ... Valpo has played 20 one-run games this year (9-11).